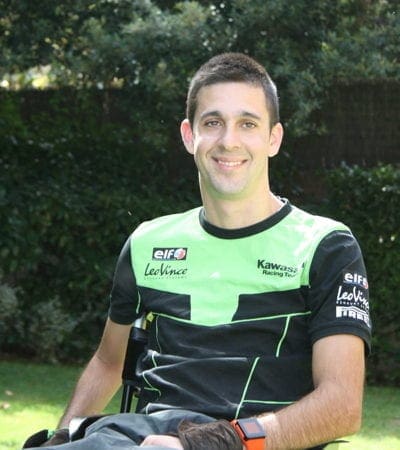 Kawasaki have today released the following information about the progress Joan Lascorz is making, following his accident at Imola during official testing in the Superbike World Championship last April.

Joan remains hospitalised at the Institute Guttmann in Spain, immersed in a process of recovery and adaptation to his new life. It is expected that by the middle of September Joan will leave the centre. Joan suffered a spinal cord injury in the C6 area due to an accidental impact against a concrete wall at the Imola Circuit. Joan suffered a dislocation of the C6 vertebra, which produced a total assignment of the spinal cord. Doctors said this injury is considered irreversible.

Joan has a quadriplegic paralysis, has no mobility in his legs, abdominal area or fingers, however he has feeling in fingers and hands. He has also mobility in his face, neck, arms, shoulders, elbows and wrists. He retains 100 percent of his mental faculties and is refocusing his life, closing projects opened in World Superbike, but with the strength, motivation and opportunities to open additional, short-term and medium-term personal projects.

Joan’s accident occurred while testing. His fall was an accident, which happened when he was doing his job, going to the limit with a race bike. From the review of the team’s data and Joan’s own feelings the reason for the accident is now clearer. Guim Roda, the Kawasaki Racing Team Manager, said “Joan lost control of the bike when entering a right-hander in fifth gear after a long straight, with the front wheel slightly off the ground. Returning this to contact the asphalt at high speed just by tilting the bike, Joan lost control of the bike and went off track. He had just made a batch of good lap times and was about to lower the fastest lap of the day against all riders on the track.”

Joan’s injuries are not the result of the fall itself, but from the fact that at nearly 200 km/h he hit an unprotected wall near the track.

Joan Lascorz comments “What happened to me is a shame. I’m not sure if it was bad luck or that conditions in Imola were not suitable for a 240 HP bike. In any case, it is undoubtedly a full stop for my career as a SBK racer, and a period in my life. It’s a very difficult situation and I have to be very strong to go ahead. I want to thank for the endless support I’m getting: all motorcycle riders both in SBK and MotoGP, and all the other categories. I also want to thank all the racing fans, and the amateur and professional bikers that have shown me examples of their affection. Albert Llovera, Filippo Preziosi, Oscar Lanza, Isidre Esteve and Pau Bach visits and conversations have been invaluable to me. I want to thank the countless doctors and nurses that have taken care of me, from the SBK Clinica Mobile, at the Maggiore Hospital in Bologna. Thanks to the UCI and the spinal injuries unit of Vall d’Hebron and here in the Guttmann: In all these places, I have been treated like a king. Thanks also to the Catalan and Spanish Federation of Motorcycling and all the support I am having from Panthera wheelchairs, and above all, to all my family, my father Juan who is having a tough time, almost worse than me, my mother Maribel, my brothers and sisters, uncles, cousins, friends and teammates they have all been at any time with me.

“Once out of the Guttman, I will deeply rethink my life and look for economic resources to suit my situation since it is not that easy. I will have to find new goals to continue enjoying life, but certainly not with the same intensity as it has been. Sometimes I feel a great sadness for how quickly it changed, all because of that wall. And I have many thoughts in my head about what happened. Sometimes I think with optimism and what the future holds.

“I have to do a lot of re-learning. It was not easy to reach the level I was at and it was the result of much effort by all those who have made it possible. From when I stopped delivering pizzas at age 18 with a 50 cc bike and began my career as a rider… It’s a very sad injustice but I have to face it in the best way possible. It is a type of injury that not only keeps you away from racing, but marks you for life and that’s something I’m going to live with forever.

“When my friends made the number 17 badge that symbolised my recovery, I was not thinking for a moment about the impact it has had and the support I have seen these months. It has given me so much strength that people express solidarity with me since my accident and I thank them all wholeheartedly. I was surprised to see Rossi, Dovizioso, Crutchlow, Hayden, Pedrosa, Espargaro, Jonny Hernandez, Lorenzo … and sure many more in MotoGP if not all, Marquez, Espargaro, Rabat, Rins … even more riders, but I’ve forgotten so many … Some teams that have been showing the sticker on their fairings. The Catalunya Caixa Repsol Team from Alzamora or Team Pons are still wearing it, and many others that I’ve forgotten to mention for sure. There have been over 10,000 stickers, and that is a point of pride for me. In SBK I think all pilots use the stickers: Checa, Haslam, Smrz, Sykes, my substitute Loris Baz, Biaggi has it near the TV in the box, Rea, Melandri, Salom, who has decorated half of his bike. In my team KRT it is on the computers, on the bike and in the pit box and the BMW factory has put it on the front of their fairings. Sofuoglu, Morais and the whole Kawasaki family; the Kawasaki STK600 and 1000 riders and of course to all those pilots STK. I thank Fujiwara and Akira Yanagawa in Japan as they have the badge in each race and the Japanese Green Team puts it on their bikes. Honda Spain has it on its website, Cup easyrace, many friends of the CEV pilots, and also there is three foot wide badge in the Motorland circuit entrance. Thanks to Solo Moto’s initiative to give it away with the magazine, and to Motocard and Kawasaki to finance it. All media have been interested and have collected my news despite my silence in all those levels I’ve seen. Bikers sent me many e-mails with photos and encouragement and although I do not reply to all I read them all! Everyone who I’ve forgotten or haven’t seen at all: Thank you very much! To all those that have invited me to events and I have not shown up: This is because first I want to find and understand my new situation. That is why I want some time to be relaxed and lead a private life. But without giving up what Joan Lascorz could do in the motorcycle world, of which I am very proud, I have lived and have received recognition worldwide. To everyone, thanks all the expressions of support!”