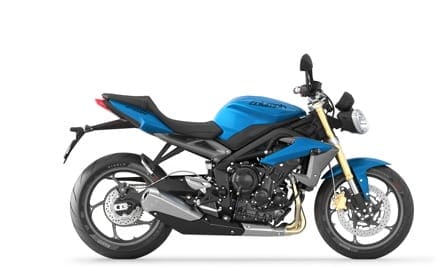 Triumph has just launched their new Street Triple range, with the most comprehensive overhaul since inception. The big news is an all-new chassis, with a reduced rake and increased trail, and a fully wet-weight of just 183kg, which they claim is 6kg less than previously.

ABS has now been added to both the stock and ‘R’ versions as an option, and the two are split once again by the stocker wearing relatively non-adjustable suspension, while the ‘R’ gets Daytona style fully adjustable units front and rear. And it gets a red sub-frame to slip nicely into that particular Triumph family. We’re waiting for the Triumph Thruxton R, bring it!

You’ll also notice the new under-slung exhaust system, which is a brave change, but allegedly helps mass-centralisation. The engine remains as is from what we can gather, which isn’t necessarily a bad thing as there’s still nothing in its category that can touch it, or come anywhere near it.

What may divide opinions are the looks, which seems quite angular in places and also not far off a Japanese bikes in others. It’s not quite the Street Triple we fell in love with, but, that was never a big looker in the first place.

No matter, we reckon it’ll still be the one to beat even with Kawasaki’s new 800cc Zed looming over it with an extra 125cc. Can’t wait to get our mitts on either version, especially the ‘R’, and roll on the new 675 Daytona! Head to www.triumph.co.uk for more info