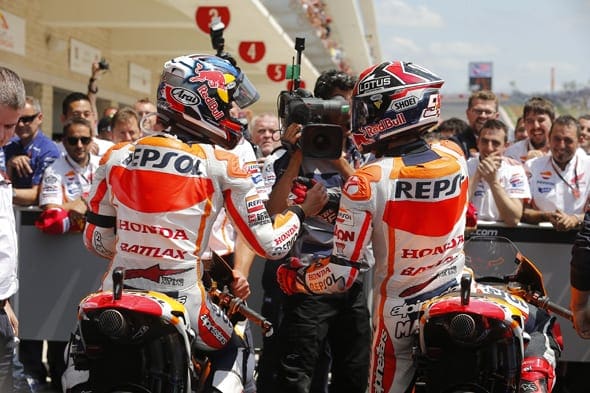 Marc Marquez: Bookies were shutting down soon after he trounced the field in every session over the weekend. This kid is unreal. He could have cleared off and risked a lot more, but you can tell he took his riding down a few levels during the race (compared to his qualifying tekkers) and used his head. And the harder rear tyre. Are we looking at 21st century Mick Doohan-type domination?

Jorge Lorenzo: J-Lo knew he couldn’t win the race but cruised to his 100th career podium, and left as joint series leader with MM93.

Andrea Dovizioso: Dovi looks half-decent on the Ducati. Some suggest his riding style suits the Desmo’s weight distribution. But once again he was the top Ducati and only a few seconds behind Valentino Rossi.

Micheal Laverty: M-Lav hit a false neutral on the first lap but ripped through the field to finish just outside the points in 16th, and 4th placed CRT. He’s nearly there with the PBM bike.

Nico Terol: The 2011 125cc World Champ really struggled adjusting to a four-stroke last season, but Austin proved he can ride after all.

SRC Kawasaki: The 24-hour experts won their second Bol d’Or in a row. The new-look team consisted of young guns, Loris Baz and Jeremy Guarnoni who joined Grégory Leblanc on the ZX-10R.

Valentino Rossi: The Doctor couldn’t find the cure in Texas. Apparently, he had some brake disc issues that slowed him but, in reality, sixth was always going to be his best at CotA. He’ll be back though!

Scott Redding: Despite leaving the US leading the Moto2 World Championship and blitzing qualifying at CotA, Redding had some tyre issues (the hoop slipped on the rim causing bad vibes) in the race and slipped back to fifth. Still, could have been worse – he could have been Pol Espargaro…

Honda TT Legends: After iffy conditions played havoc with Magny Cours’ Tarmac, a few of the WEC teams dropped out before night fell. Our very own TT Legends squad, who ran Mickey Dunlop for the first time, were looking good for a podium position. Unfortunately, the ‘Blade went bang with McPint onboard in the early hours of the morning.