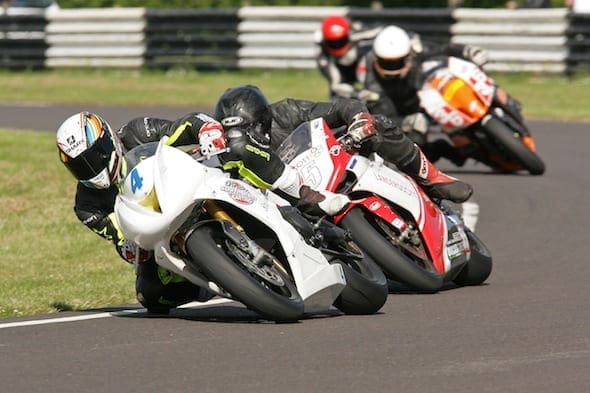 The annual King of Combe used to be a massive event for the Wiltshire circuit. British Superbike teams and riders used it for experimentation purposes, testing new parts and riders, and chasing big prize money. You could say it was a modern-day International one-off race like the old school battles in the 80s/90s, such was the quality of the grid. I remember, in 2005, lining up with Kiyo, Jonny Rea and looking back and seeing humble club racers at the back of the grid. It was a unique occasion.

Apart from Thruxton (which is also dogged by noise issues), Castle Combe is the only major circuit in the southwest, so spectator attendance was huge. Over the years, different promoters and clubs have run the event and, although the rockstar racer grids have dwindled, the crowds still flock.

It’s been a pretty shitty few weeks for my regular team JHS Racing: the NW200 got cancelled. Again. And the team’s GSX-R 1000 that I should have been racing for the rest of the year was demolished in a 160mph crash at the TT. Thankfully, legendary rider, Dave Moffitt is ok apart from a punctured lung and a few broken ribs.

So, after some last minute sorting, I decided to take the Stratstone/Fast Bikes Triumph 675R for a trip to my local track, entering the 600cc class and the Sound of Thunder at the NG Road Racing event. The last proper race win I had was the KTM Super Duke R Battle at Thruxton BSB in 2008. And with half-decent prize money on offer, and a load of mates to impress, it’s fair to say I was motivated.

Being a late entry, I had to start the qualifying races (finishing order dictates the grids for the main races) from the back of the 40-man grid. Finishing 5th in SoT and 7th in the 600s, things were looking peachy for the afternoon. The first race was the Sound of Thunder, and a chance to battle with very fast OAP rider, Chris Richardson on his 1098. Now, this ain’t just any 1098. Chris bought a 1098RS directly from Ducati and is one of Michel Fabrizio’s full-factory Corse bikes from a few years ago. I think he was scared of crashing it, as I ended up winning the race and taking a new lap record.

The 600s race was a trickier job. A first lap melee involving a few riders meant Dan Fuller snuck away with a few second lead on his 675R. I managed to get him back (just) by ragging the nuts off the Trumpy and win the Wayside Garage (the Bridewell family’s business) sponsored race, plus take another lap record. Funnily enough, the final podium for the 600s was an all Triumph Triple Challenge affair, with Scott Pitchers and Dan Fuller (who pushed me all the way) making up an all-675R box. It’s always nice taking money off the Bridewells.

The feature race was won by a good mate (and ex-boss/landlord), James Cox, who was crowned King of Combe riding my old ZX-10 – although he has fitted a new frame and swingarm since I bent it. He also took the club lap record and rounded off a cracking weekend. When racing is good, it’s good. When racing is bad, it’s utter dog poo, so there’s confidence aplenty, especially after beating some front-running TTC boys. It was also great to meet a few Fast Bikes readers.

It looks like Thundersport GB at Oulton Park will be a no-goer, but we hope to salvage something from the JHS Racing Gixer. I’ll be back at Snetterton BSB for the next round of the Triumph Triple Challenge on the 5/6/7 July.

Big thanks to EDP Photo for the pics