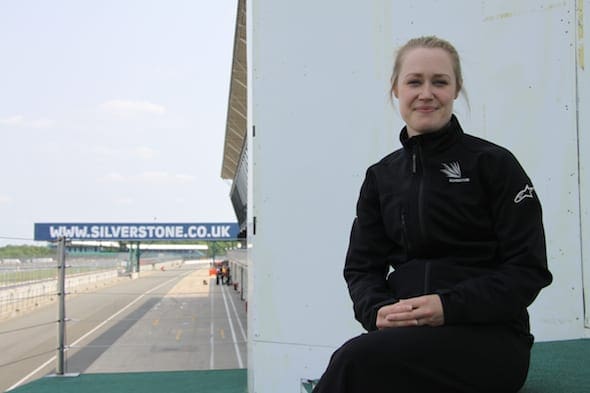 With just few weeks until British GP at Silverstone (qualifying starts on the 30th August) our homegrown racers are making the headlines and ticket sales are booming -must be something to do with Cal and Redding setting the world on fire, and having VR back on a decent bike.

For a six-strong event team at Silverstone though, the charge towards the 30th August started a long time ago. For them, the temporary physical structures needed to put on such an event start building two weeks prior to the race weekend, and all of the organisation and logistical requirements needed to make sure everything is in place for build right through to race is vast.

Liz Pilling is one of the team at Silverstone responsible for all events including the GP – oh, and of course F1,  and a plethora of events at the Northamptonshire circuit. Liz picks me up at The Wing in her Mitsubishi truck complete with green rolled up carpet in the back. “Oh excuse that, it’s Bernie’s (Ecclestone). I am not really sure what I need to do with it”.

F1 was a few weeks ago and they were still packing up. Apparently, The Wing has to move all of their kitchen appliances out when F1 comes to town: they fit all of their own – which is exactly the same stuff – at a rumoured cost of £30,000. “Money” by Pink Floyd resonates in my head. It grows louder as Liz tells me that over the course of the F1 weekend they open an additional heliport, as over 5,000 people are transported to and from the circuit by chopper.

There isn’t much cash in MotoGP, but still a fair amount obviously and the needs of DORNA are as comprehensive. Liz explains “They are very specific in what they need. We have a number of dossiers as thick as a bible giving instruction on everything from timekeeping, security, event management….” For me this would be daunting but to Liz there is a glint in her eye. Organisation is definitely her passion and she, surrounded by a very able team,  is responsible for everything bar the track and the riders. When it comes to the track, MSVR move in with Stuart Higgs at the helm, but the vast infrastructure that we depend on to enjoy the GP is all Silverstone.

The decision to move the GP paddock out of the Wing and into the old location was a learning experience from last year. “We want that joined-up feeling again” says Liz, and for sure Silverstone is vast. It’s four miles to walk around the circumference of the circuit. The International Paddock is the centre of things, has the structure to hold the support paddock securely, while not being too out of the way as it was at Stowe. This had been a massive operation last year and there is a cost saving in the moving, but money saved continues to go into improving the circuit with plans of a tunnel or bridge nearer the Wing making it far more accessible.

An army of ‘race-keepers’ have been employed for the two major events (F1 & MotoGP) this year to help improve the visitor experience. “There is great feedback potential from them” explained Liz. The race-keepers are like the games-keepers at the Olympcs – unpaid but well looked after, have their own campsite and are fed and watered. They are also given premier seats to watch the premier events they aid.

Liz talks fast, and I get the impression she needs to as she has work to do. At the time of our meeting she was discussing what Silverstone would be doing for Riders for Health this year. “We do as much for Riders over the course of the event as we can as we recognise what they do for the bike industry – we are not the big corporate animal that people have believed us to be”.

Liz takes me back to the Wing. So how long have you been into bikes, I ask? “I wasn’t interested in bikes before” she states “But now I cannot get enough of it”. So with the opportunity of AAA access at the GP will she be rubbing shoulders with Rossi? “No, I will be making sure the bins are empty, the toilets clean and everything is right where it should be”. Gutted!

So, if you are going to the MotoGP, look out for a white Mitsubishi, hazards flashing with a very smiley lady at the wheel – she is one of the guys behind the guy that deliver the whole event, and if she has a green carpet in the back of the truck – you know whose it is.