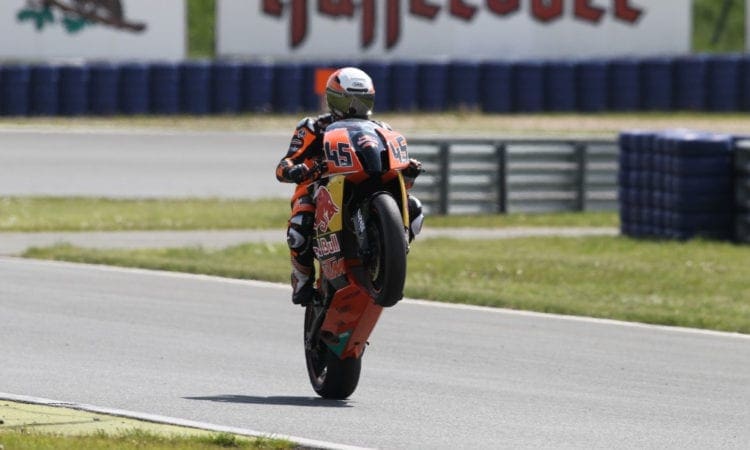 KTM scored its first superbike win at the weekend. No, it wasn’t at Kyalami, but rather at the Oscherslaben track in Germany during the ever interesting German IDM championship.

Piloted by Austria’s Martin Bauer, this is KTM’s first superbike win with the RC8 R and puts the manufacturer at the top of the standings in IDM. Das ist gut!

Considering the firm has to battle against uber powerful BMW’s, R1s and Fireblades ridden by decent riders like Barry Veneman and former world champions like Joerg Teuchert and Karl Muggeridge, this is no mean achievement for the factory, who now hope for more of the same throughout the rest of the season.

Here’s what the winner had to say afterwards:

As an Austrian it is absolutely great to deliver the first ever race win for the brand KTM….I think we have been able to show exactly what this bike is all about. We already had the pace at the Lausitzring, but after a crash when I was in the lead, I reduced the tempo a bit in the second race so I could be sure of picking up some points. It certainly wasn’t easy here. Two crashes in training and starting from the third row. It was tricky to overtake those in front of me when I started back at eighth on the grid. But I took them on one at a time, the bike went well and I had Joerg in my sights. I was faster in some parts of the circuit so I was able to catch him and take the lead. Then when I had enough advantage I could relax and ride home. I’m very thrilled to have got the best performance out of the KTM RC8R in a relatively short time.”