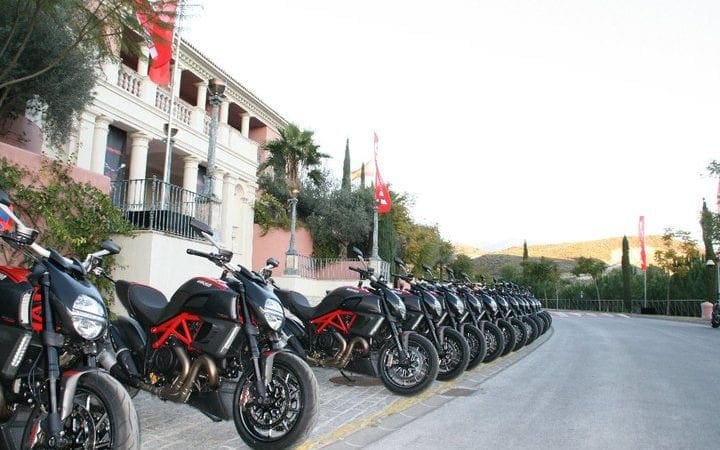 The new Ducati Diavel is quite unlike anything else you can think of. At its launch in Spain, it rapidly shed any notion of it being a heavy, cumbersome and expensive trinket for Ducatisti alone and showed itself to be a unique take on the muscle sector of motorcycling’s gym.

It uses the same motor as the Multistrada, itself hardly lacking in power, but this is boosted in the Diavel thanks to the use of a more direct exhaust system. That means 162bhp at your disposal. Hooray. Hang about, though, that’s more than enough power to tie a muscle bike up in knots. We could have a problem here, but do you really expect Ducati to release a bike that won’t handle well…

It may be muscular, but the Diavel is no uncultured beast as ground clearance aplenty has been engineered into it. The massive 240-section rear tyre doesn’t undo this advantage, and it soon becomes clear that this is a machine with genuine sportsbike pretensions. Of course, it’ll do the cruiser stuff – with aplomb given these looks – but casting it as a one trick pony does the Diavel a massive disservice.

This is a machine that will surprise many. It’s many bikes in one and should be considered if you’re rich and fancy a statement machine that is also able to quench the cornering fires within.

The standard Diavel comes in at £12,995, with the three kilo lighter Carbon version priced at £15,595 (more if you want the red version). For more information head to Ducati.com or check out our full report in the next issue of Fast Bikes.