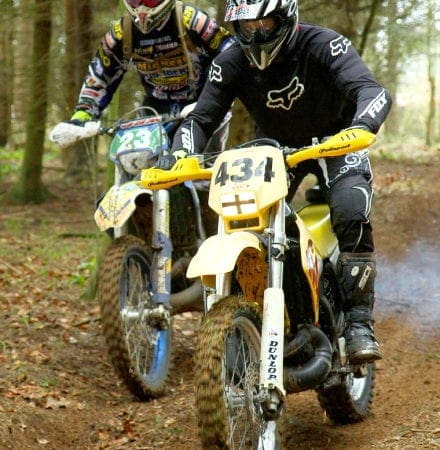 There is no point trying to hold any of you in any anticipation whatsoever, to build up to the grand result of my first ever endure race. As I have stated before what I really desperately wanted to achieve was avoiding the DNF (Did Not Finish), this I did handsomely by one letter – my debut race classification being a DNS (Did not Start).

The day began well enough, there in plenty of time, registered, transponder fitted to the correct wrist, passed inspection and into the holding area with the other bikes in my class. My pit lane was fully prepared with Two Stroke, stands and Jaffa Cakes and Red Bull and the weather was Perfect, a sunny day that followed a dampish week making the course damp but not sodden.

With five minutes before the off the hold pen was clouded in blue smoke, engines revving as if fuel had halved in cost as opposed to doubled – a sight that even Clarkson would be proud. This is where my trouble started, the RMX250S kicked into life okay, revved high and well in the soothing rhythmic throttle movement that you obtain owning a 2 Stroke but when the revs dropped, no idle – none whatsoever. She will be okay once we are off I told myself.

Engines then cut and off went the pros, roaring into life and disappearing in a haze of mud and vigour. Following them the Veteran experts, 2st Clubman and 4st Clubman and then me. Kick, kick, kick, kick…. Nothing. Finally she came to life and I gestured to the steward that I would go with the back markers – he gestured back to keep her running for F sake.

Finally I went and thought okay bad start but start I have, and thats when the next problem kicked in. No top end power at all, throttle fully pinned and I was as fast as an asthmatic ant. Something was definitely not right. I got into the woods before a couple of people completely to my surprise but they quickly passed me and I was left tussling with a fellow struggler. I did alright through the woods, without the opportunity to go flat out I didn’t miss it but once out in the clear I knew I was going nowhere. I slipped up a side road, back to the start and revved once more. Full Revs again, must have been a blockage so I started again but once more fully pinned nothing.

I returned to the Start finish again by the escape route I employed before. Propped up against the fence I went to work. Clock was ticking and I had to get back out and get this sorted. Here was where the Enduro spirit really showed itself to me, everyone wanted to help. An old friend of mine Johnny Milne got straight into it. We checked the plug for potential fowling, was the engine starved of air due to an over oiled filter, or even the 19 year old OE exhaust clogged with oil? No… Carb came out and was fine, fuel mix was spot on and all that could be done trackside was done, unfortunately so was my race.

Disappointment is not even near, 3 months of gym work, part success in quitting smoking and an ample financial investment just seemed to have all been a waste. But that was the immediate reaction, there were a huge number of positives. Firstly I will be less phased on the start line again, I learnt alot about the RMX250S and potential problems I could face and did get a bit of a run through the woods. My total distance was five miles, not what I had expected but in the tight technical section had a taster of how my Dunlop Geomax 51 tyres would behave, how my enduro kit fitted and I overall felt extremely well equipped to be where I was. In addition the posted picture from Jack Stringer makes me look like I was competing pretty hard, which I certainly would have been.  Just bar my poor old bike who is back at the doctors she will rise again for round two on April 17th.