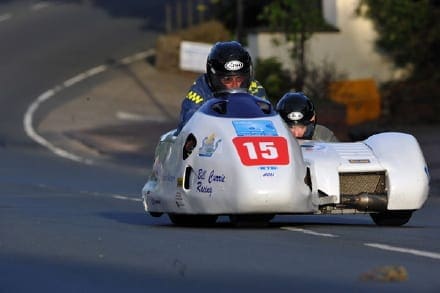 It’s with great sadness that we have to report a double fatality on the Isle of Man today during the second qualifying session for sidecar racers.

A statement just released by the ACU reads:

“ACU Events Ltd regret to announce that sidecar competitor Bill Currie, 67, from Ellesmere Port, Cheshire and his passenger Kevin Morgan, 59, from Shrewsbury were both killed during the second sidecar qualifying session at the 2011 Isle of Man TT Races following an incident at Ballacrye in the North of the Island. The session was immediately red flagged following the incident.

“Bill was an experienced racer who first competed at the TT Races in 1969, when he recorded a third place finish. He finished 8th in last year’s TT sidecar Race in his fastest ever race time of 107.944. Kevin made his TT debut in 1984. This was the first year that the pair had competed together.”

Our deepest sympathies go to their friends and families at this sad time.