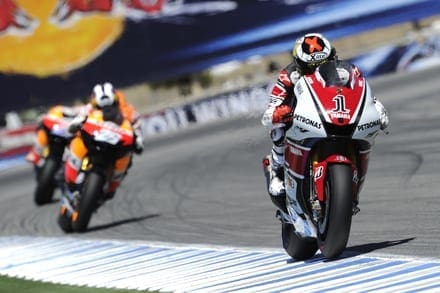 Hold on tight, to your sofa. As well as the Gunners going to Old Trafford to demolish the Mancs, there’s a whole loada racing on the box this weekend.

Let’s start with MotoGP at Indianapolis which is a bit of a Mickey Mouse track. Praise the Lord, because the Yanks have resurfaced most of the circuit and banished the multi-tarmac surfaces that caused so many issues, and crashes. Still, I can’t think of an epic race that’s taken place there.

Last year Dani Pedrosa whooped ass and took the victory, from Ben Spies and Jorge Lorenzo. This season, Pedrosa looks to stay on his Repsol Honda and rekindle the form we/he know he’s capable of – he looked set to win at Brno last time out, but crashed early on.

But let’s be honest, Casey Stoner has to be favourite. He’s frickin’ awesome right now. He wasn’t in with even a sniff of the victory at Brno, but managed to take advantage of his rivals’ misfortunes to extend his championship lead to 32 points.    Whoregay (who’ll be riding the gorgeous red and white liveried M1) needs to start pulling serious points back if he’s going to retake the title but, unless an injury occurs, Stoner and the Honda look invincible.

Gossip suggests Marco Simoncelli will stay at Honda next year, ousting Dovi for the third factory Honda. After his debut podium last time out, Super Sic should be interestingly confident at Indy.

Home boys, Ben Spies and Nicky Hayden, always shine on home soil and have a good history at Indy. Spies really needs to get his elbowz out and start properly hassling the elite, while Hayden has the perfect excuse in that the Ducati is utter dog poo. Valentino Rossi, even with his upgraded GP11.1 tweaks, will struggle to make the top five.

In other news, there are lots of rumours flying about regarding our Cal Crutchlow. Let’s hope Cal can stay on his Tech 3 Yammy in America and cement another year in the MotoGP paddock. Bradley Smith and Eugene Laverty are reported UK names to join Tech 3 in 2012.

Talking of the UK, British Superbikes head to Cadwell Park this weekend, without John Hopkins. In case you didn’t know, Hopper crashed the Rizla Suzuki during MotoGP practice at Brno and needed surgery on his hand. Due to the ‘Showdown’ finale in BSB, where only the final three rounds really matter for the top six, Hopper is safe along with series leader Shane Byrne and Swan Yamaha’s Tommy Hill.

Reigning champ, Ryuichi Kiyonari, has to find some pace to stop Michael Rutter and the rest ruining his championship chances. Kiyo has lost some serious mojo. Also, look out for Tommy Bridewell and the latest installation of Rob Mac’s musical R1 chairs, plus Josh Brookes jumping the Mountain. The party in the Park is always a spectacle.