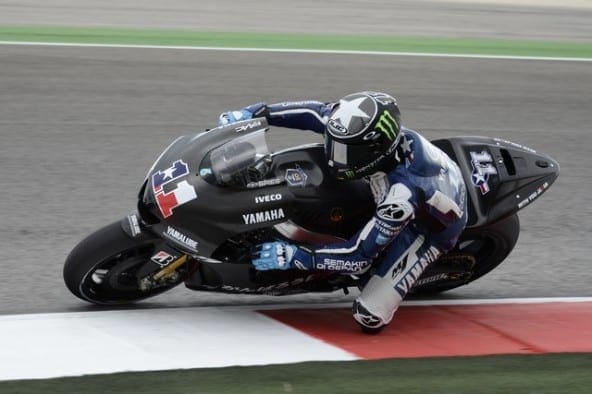 Fresh after winning the Misano MotoGP race, Jorge Lorenzo was out on the new Yamaha litre MotoGP missile, putting in the early miles round a track that will certainly be in the 2012 calendar.

We’ll not confess to knowing too much underneath the black fairings, but given Lorenzo stuck in a time below the lap record – impressive stuff given Misano is almost as tight as it gets – Yamaha must be leaving Italy happy as pigs in the proverbial…

On the test, Lorenzo had this to say:

“It’s been a little bit more difficult here than Brno, which is a very fast track. Misano is a little bit slower so the difference between the 800 and the 1000 is much smaller. It’s difficult to understand the riding style you must use straight away. We’ve made a lot of progress in a couple of hours and the bike has a lot of potential. I’m very excited about the future. We’ve been working on the electronics to help in the braking area but mainly I’ve been getting used to the riding style of the bike and also adapting the bike to my riding.”

Ben Spies was slightly slower than Lorenzo, “We rode the same bike as we did in Brno but we changed a bunch of things and started working on a lot of electronics. Misano is a much more physical track; it’s quite tight so there’s a lot of wheelies and rear spinning. It’s fun to ride but very physical compared to the 800. I enjoyed it a lot and we went quite fast on it, getting some pretty good lap times. We’ve got a lot of data now for the engineers to go away and work on the next step for our next test. I think next year is going to be really good and I’m looking forward to racing the thousand!”

For more info, head to www.yamaha-racing.com