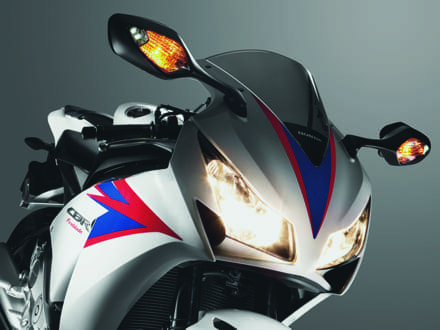 So the worst kept secret of 2012 is officially out as Honda has released pictures of the new Fireblade to the world. Having seen the new bike unofficially in pictures that were leaked on t’internet, this is the real deal – and we can confirm much about the bike.

Efforts have concentrated on the chassis, to ‘enhance riding enjoyment’ – which is nice. In reality, this means new front and rear suspension and new wheels. The front becomes a Showa zone, with the acclaimed 43mm Big Piston Fork slotting into place to improve damping, grip and stability.

The rear sees some big news, with a ‘Balance Free Rear Cushion’ system from Showa. This is the first use of the system on a motorcycle and uses a double tube design for better response and control. The Unit Pro Link configuration is retained. The system uses no valves in the damper piston, instead oil passes through a separate damping component to generate the damping forces. This is said to improve smoothness of damping control as well as increasing consistency. The system has been used successfully at the Suzuka 8-hours and in JSB.

The new wheels are 12-spoke cast aluminium numbers, and they look fantastic, although there is no mention of any weight loss here.

Elsewhere, there’s new styling, with the look tweaked at the front, with a sleeker profile and sharper nose. The old bike’s blunted snout was always controversial, so this move will be welcomed by many. Kit wise, there’s a new instrument panel (with new gear indicator and lap timer) and an assisted slipper clutch (claimed to be the same type used on the 800cc MotoGP bike). The steering damper is now the second generation HESD unit, and like in 2011, there will be a C-ABS version.

The engine isn’t untouched, although the architecture remains largely the same. The fuel injection gets revised settings, but mention is made of this being effective at lower revs. So that means it’s not in the hunt on max power figures and there’s also no traction control, with Honda preferring an organic solution to grip.

There will be three colours, Pearl Sunbeam White, Victory Red and Graphite Black. There is no word yet on price.

So what do we reckon? Well, we didn’t want Honda to do much to the current Fireblade, given its immense performance. But there’s a danger that these revisions may not be enough to keep the Fireblade in the game over the duration of the model’s life. No TC will alienate some customers, now expecting this in the class. Now Yamaha’s R1 will have TC in 2012, and it being likely on the new GSX-R1000, the Honda is the only bike without it. The chassis changes will have to carry the bike – and they sound like there’s the potential there – so we’ll have to see. As ever, watch this space!