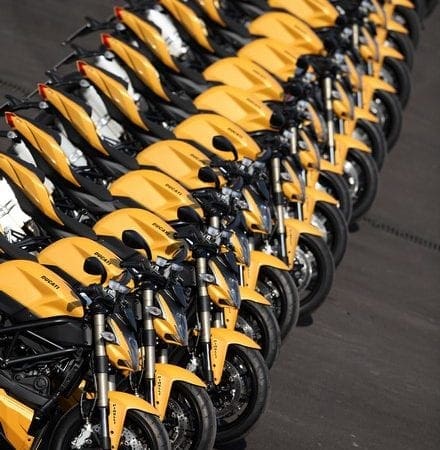 Ducati has blinked first in the battle to reveal its 2012 range, with the launch of the new Streetfighter 848. The new bike uses the motor of the 848 EVO superbike, with sublte revisions to the top end, that gives the motor the 11-degree Testastretta name. This lops 8bhp of the superbike’s top end, but flattens the torque curve nicely. In essence, it’s all good here. Lots of lovely power, spread evenly above 4,000rpm.

Elsewhere, the bike gets a new frame, new Marzocchi forks, a new Sachs shock, new aluminium wheels, new Brembo brakes and a new rear tyre size of 180/60. So while it looks like a Streetfighter, there are plenty of changes to crerate a bike in its own right.

But what do all the new changes mean? Well, first off, the bike gets a £9995 price tag, which is about as good as it’s going to get for Ducati. This puts it a grand above the Monster 1100 EVO and a grand under the 848 EVO. In other news, the stock big Streetfighter gets put out to graze, leaving the S as the sole representative in the big class.

The launch was held at the brand new Autodromo di Modena, not far from Ducati’s Bologna HQ. The track is as twisty as it gets, but the bike faired well, depsite it being not built for this sort of malarky. Ducati see the bike as more of a styled all-rounder, leaving other bikes in the range to be dedicated track weapons. At least Ducati stuck Pirelli Supercorsa SC2s on, and adjusted the suspension to suit. Let’s just say it was a lot of fun, even though most of the other journos hated the track – I loved it, right down to the gear and brake lever!

After lunch in the Ducati MotoGP hospitality unit (sensational!), it was a road ride, putting the bike through its paces in its more natural environment. The bike shone as brightly as the weather, without any chinks in its armour arising. Alright, the yellow isn’t Ducati’s finest hour, but at least the bike comes in red and black, too. The only sticking point is the price. With rivals like the Street Triple easily undercutting the Ducati, the SF848 will have to rely on its looks more than it would really want.

Check out Ducati’s video here, and look out for the full report in the December issue of Fast Bikes.