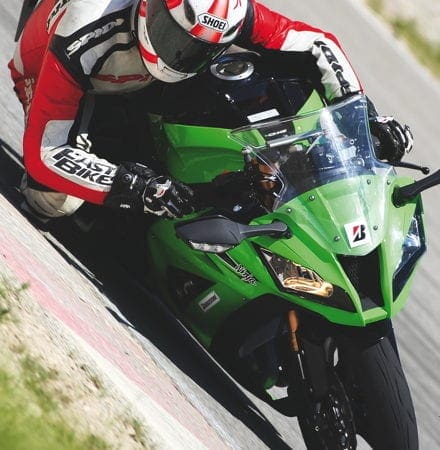 Bridgestone’s incredible R10 – which was the control tyre for our 2011 Sportsbike of the Year megatest – is about to be joined by a new family of other tyres.

The headline news for us sportsbikes fans is the new S20 Supersport tyre, which you can expect to see as OE fitment on the new 2012 CBR1000RR Fireblade. There’s been no release date announced yet – but if the R10 is anything to go by, we’re in for a incredible feast of control, feel, and longevity.

From 2012 onwards the Battlax range will be rebranded to make the categories more instantly identifiable, as follows:

The R10 features a new 3D tread pattern which maximises grip, either on the throttle or hard on the brakes. The pattern wears well, and on SBOTY with the Aprilia’s rear nearly down to a slick after two whole days of flat-out track abuse – it was still performing as new. Yes, as new. The stiff carcass allows low track pressures and provides amazing feedback at the front and predictable drive at the rear. They’re available in 120/70 front and 180/55 and 190/55 rear, the front comes in one compound, the type 3, and two compounds at the rear, type 2 and 3. We’ll bring you a full test and review of the S20 as soon as we get our hands on a pair.

If you’re hungry for more news – keep an eye on Bridgestonebikersclub.co.uk