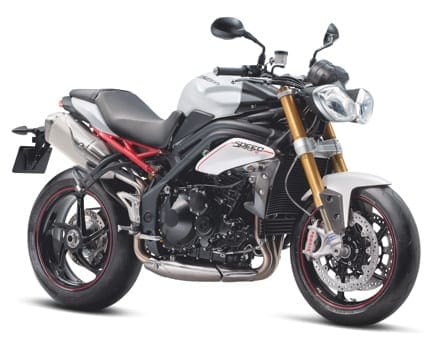 Triumph has enjoyed a meteoric rise through the sales charts over the last couple of years – mainly by sticking to the simple rules of ‘give customers what they want’, and ‘make it affordable’.

For 2012 we’ll be getting what we’ve spent the last couple of years asking for – a Speed Triple R. Developed in close collaboration with Swedish suspension brand Öhlins, the Speed Triple R sports the latest specification NIX30 43mm fork, and TTX36 shock. To minimise unsprung weight as much as possible, the lightweight five-spoke forged aluminium wheels from PVM are over 1.7kg lighter than those on the standard machineand top spec’ Brembo four-piston radial monoblocks, with optional switchable ABS, conspire to give a claimed 5% increase in braking performance over the standard Speed Triple.
It’ll be available in Phantom Black or Crystal White, each with the red subframe which denotes the R status.

Triumph’s phenomenal success with their Tiger 800 modelsm ahs spawned a big brother in the adventure market too. The Tiger Explorer is powered by an all-new, shaft-driven, 1200cc, three-cylinder engine, delivering potentially class-leading performance to the adventure touring market. Featuring a high-specification as standard, the Tiger Explorer debuts Triumph’s new ride-by-wire throttle system and includes cruise control, switchable ABS and traction control as standard. It has a steel frame and cast alloy wheels, 19” front and 17” rear, and a single-sided swingarm.

Prices and availability are expected to be announced at the EICMA show in early November – we’ll bring you the news as soon as we have it.