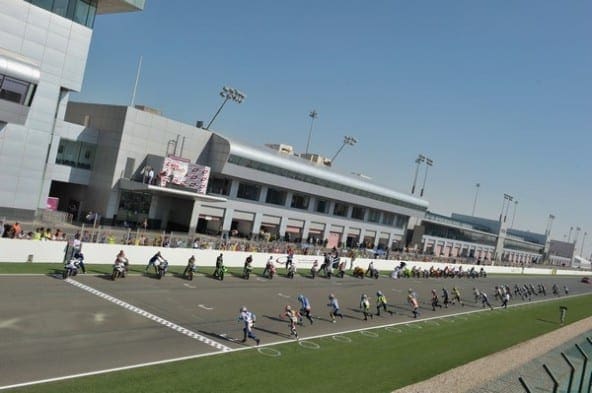 The Honda TT Legends team scored a respectable 5th place at the last round of the Endurance World Championship at Qatar on an ABS fitted CBR1000RR Fireblade, leaving the team seventh in the end of year standings.

Qualifying ninth, the Honda TT Legends team, comprising John McGuinness, Keith Amor and Glen Richards (Richards was drafted in at the last minute after Cameron Donald injured himself falling down the stairs – true story), were running as high as second, before the more established endurance teams made their experience pay.

Richards started the race (well, could you imagine McGuinness running?!), and eight hours later it was John McGuinness that crossed the line to score fifth overall – the team’s third fifth-place finish of the season. Given the race fielded such luminaries as David Checa, Matthieu Lagrive, Sebastien Gimbert, Katsuyaki Nakasuga (fresh from MotoGP) and Steve Martin in various teams, this fifth place is a decent result.

Here’s what the team had to say on it. Head to the Honda TT Legends website for more.

Our aim for this year was to finish sixth in the championship, but to be honest we are more than happy with seventh. It’s a great achievement in our development year and I think the whole team can be proud of what we have achieved. We have learned an incredible amount over the season and we will take all that into 2012 with the aim of becoming competitive enough to fight for the podium.

We’ve finished three races this year with three fifths and I think that’s a fantastic achievement. Looking at the race results, you’ve got teams with massive experience and world championship titles above us so we’re the best of the rest if you like! We strung eight hours together no problem and as a team we bought the bike home. It was quite a experience to finish the race here and the 8 Hours of Qatar is another thing to tick off my list of things to do. I have to mention all the boys in the team – they’ve worked mega hard and there has been a lot going on behind the scenes with the ABS project amongst other things, so thank you to them.

It was quite an eventful end to the championship in the end. I’m really happy that the team has been able to move up to the seventh in the championship as we’ve had a few unlucky breaks this year. Glen and John did really, really well. It’s was tough to learn this track but overall it’s been a good year. I feel privileged to be part of the official Honda outfit.

I am really happy that I’ve been able to do a half decent job. It’s always the fear of the unknown when you haven’t ridden the bike before but it’s all worked very well. The team has been fantastic and the bike was really good. We managed to get fifth in the race and move up in the championship, which the team are very happy about so I’m happy.