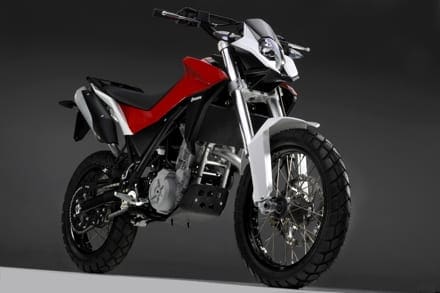 Hot on the heels of the Nuda 900 R, Husqvarna has released details of another new model – the Concept Strada – which was unveiled at the Salon de la Moto show in Paris.

Just like the Nuda, the Concept Strada (Italian for ‘street’) will be targeted at youthful on-road motorcyclists who will appreciate its sharp styling, fun handling and great road manners. With a low weight, a punchy 650cc single-cylinder engine and quality components throughout, the Concept Strada is designed for the daily grind. The starting point for the Concept Strada is the ultra-reliable 650cc engine originally developed by BMW for its ubiquitous F-Series range and in its latest incarnation now used to power the new G 650 GS . This engine has been ‘breathed on’ by specialist Husqvarna engineers and the subsequent power upgrade has resulted in an extremely lively machine that (at less than 170 kg dry) will put a smile back on the face of even the weariest commuter. This passionate mix of Husqvarna style and BMW engineering expertise is already in an advanced stage of planning and production is imminent. The Strada will be introduced into the market in 2012.

Like the Nuda before it, and the Concept Moab that was unveiled in Husqvarna Motorcycles’ home territory at the recent EICMA show in Milan, the Concept Strada is further evidence of the company’s commitment to expanding its model portfolio and providing fans of the legendary Italian brand with a new series of road motorcycles. BMW-powered, but Husqvarna-driven, the Concept Strada will be the perfect machine for taking on the urban jungle. Its combination of easy handling, punchy engine and user-friendly ergonomics will make it appeal to both young and ‘young at heart’ male and female riders looking for an extra special motorcycle for everyday use. It is expected to go on sale in 2012.

We’ll bring you a test as soon as it’s available – the first test of the Nuda and Nuda R is in the current issue of Fast Bikes.