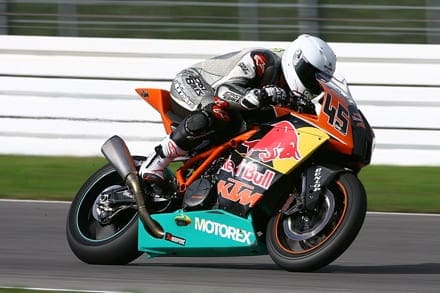 IDM is the German Superbike championship. KTM is Austrian. Team Orange had one mission – to beat the BMWs and whip the title.

KTM’s RC8 R has always been synonymous with hedonistic circuit skulduggery, yet grids worldwide have been bereft of orange-flavoured Bavarians. In truth, the RC8 just hasn’t got the gonads to compete with the four cylinder brigade under FIM rules, but the chassis remains among the elite in the game. There have been a few attempts at running them in Euro Superstock and BSB, but the KTM has never reached its full potential.
Meanwhile, over in neighbouring Germany, the factory has been putting some serious effort and money into winning the IDM Superbike championship. And they did, with veteran-spec-wearing Martin Bauer onboard, backing up the companies ‘Ready To Race’ tagline. KTM were so ecstatic, they invited us to thrash the title-winning RC8 R after the final round at Hockenheim. Oh go on then.

As you can imagine, the grid is riddled with S 1000 RRs and wieners, but the rules favour KTM with a production-based ethos – so no engine tuning, except airbox mods and free roam with exhausts. The camshafts, pistons, cylinders and heads must remain standard, and valve timing can only be tweaked via cam gears. IDM ruling allows a change in head gasket. That’s your lot. But, being a factory team, every internal component can be selected from a medley for the perfect balance, aka blueprinted.

It’s a similar narrative for chassis work. While a small semi-detached in Croydon could be substituted for 16.5-inch rims, WSB-spec forks, and Kenny Roberts swingarms seen on full-blown Superbikes, IDM use standard fork outers, swingarms and road size wheels. The only areas for exquisiteness are electronics and use of carbon fibre.

Before letting us loose on the factory goodness, KTM had to change the exhaust on Bauer’s bike. IDM changed the noise limit to 115dB, which ain’t far off a MotoGP soundtrack. And due to the ‘test’ day landing on a public trackday, the slightly more accommodating 105dB twin-exit system was fitted.

For obvious reasons, and simplistic rules aside, this is the most exotic RC rolling on rubber. Taking full advantage of the open electronics, KTM use top-shelf Magneti Marelli (like the majority of WSB teams), so dash, wiring loom and rider aids – launch control, traction control, and you could probably set your Sky+ with all the sensors onboard. Engine braking, one of the areas that could improve on the road bike, is looked after by opening the butterflies slightly, coaxing you into the turns with confidence.

More than your average amount of buttons to press…

As I ausfahrt the pitlane, it’s refreshing for a Superbike to feel so closely related to its road-goer. The bars are wide and pegs set high but there’s clear correlation here, and the 17-inch rims don’t alienate handling beyond road bike recognition. Jeremy McWilliams was also at Hockenheim. He’s been highly influential in the development of the bike and warned me of just how sexy the front-end is. Jezza is one of the honest faces in the global paddock but there may have been a little sense of KTM ‘commercialism’ talking. There wasn’t.

Whatever geometry settings Martin Bauer’s bike has installed, they need installing on KTM’s road bikes. Dunlop NTEC slicks invest massive confidence from the off anyway, but I’ve never, ever ridden a bike with as much mechanical grip from the front. It was like I was mowing the lawn with an old-skool Flymo, chucking the thing wherever needed – good job, as Hockenheim isn’t the easiest place to learn. Not only does it steer with neutrality but you can also bet your bollocks on the front like no other. And I mean trail braking like a GP God deep into a turn. Fully wet, the bike weighs 180kg and feels poised and ready. WP forks (KTM owned) boss the front but an Ohlins shock is used to support the rear. The WP’s action contributes to the fluidity of the nose, super-progressive and as if I’d set them up myself over the year. The balance on and off the throttle is sublime, and activates the weight in all the right places, at the right time.

The other standout feature of the factory RC is the gearbox, and just how slick it is. KTM boxes are (sometimes) renowned for being made of cheese. When I quizzed the crew chief about the complete lack of false neutrals and the super-liquid action, he put it down to the quickshifter and “the main focus of meticulous assembly and optimum exploitation of production tolerances”. Basically, picking the premium components for a slick box.

Burying it into a turn with the front brakes on hard, the fork at the
bottom of its stroke – don’t try that on your road bike

The motor itself, unsurprisingly, is unmistakeably an RC8, just with a healthy dose of ‘roids injected. KTM claim 190bhp, which ain’t far off when you consider Martin Bauer doesn’t get smoked by the 200bhp+ Beemers on the straights. KTM admit that, at some circuits, they were 8km\h down on terminal speed. The delivery has a broad spread of power, boosted at the bottom for instant hit during corner exit (backed up by TC), and the power keeps churning at the top-end.

If Jesus and The A-Team combined to make an RC8 R, Martin Bauer’s Motorex KTM would roll out of the magic shed in heaven. Yes, she’s straight out of the factory, but KTM’s handy work and the IDM rules mean it’s one of the friendliest superbikes out there, yet still a ballistic riot. Expect to see the Austrians in WSB and BSB very soon…