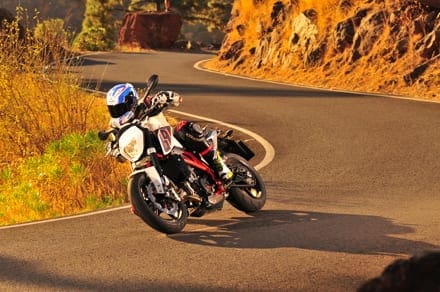 Fagan grabbed the ticket to Gran Canaria for the official world launch of the new 2012 KTM 690 Duke – here’s his first impressions, and some video footage, ahead of the full launch report in next month’s issue.

Nearly 20 years after the original was released, KTM has launched the fourth-generation Duke. The previous incarnation of the 690 was bloody hard work, so the Austrians wanted to broaden its appeal with a more user-friendly approach. And they have.

Drive-by-wire is the highlight of its 90% new components, with a throttle unlike any other KTM – smooth and progressive. The LC4 mono-pot is also silkier and backs-up why the company persists with the single life.

Also added for 2012 is the Bosch ABS system fitted to the firm’s SM-T. You can read all about how the new 690 Duke coped with the mountains in Gran Canaria in the next issue. In the meantime, here’s some moving images – in both senses of the phrase…