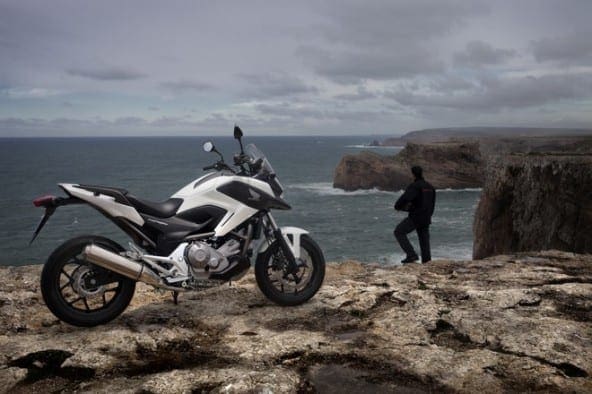 The bike itself is perfectly competent. It’s comfortable, agile, well built, reliable, a typical Honda, but now with better fuel economy. But in building a bike that fulfils its remit, there’s never anything in reserve for those ‘ah, fuck it’ moments that makes biking brilliant. There are chinks of excitement, though. Yes, the motor is docile and packs up at 6,500rpm, but you can build momentum up and hit 110mph. This can get you into corners well, where the unadjustable soft suspension copes well enough with the stresses and strains of these speeds, but once you’re at the apex the fun is all over as there’s nothing to kick you out of a turn. Plenty of torque was promised, but not enough felt like it was being delivered.

But we come back to the bike’s purpose. A day spent in the hills of the Algarve was never seat-of-the-pants stuff, but filling up the bikes after a 150kph ride proved the bike’s point. It sucked just seven litres of fuel, even with the throttle cable stretched for much of the duration. It carried my rucksack in the dummy tank, and allowed my to store my lid in it at lunchtime. It kept me comfortable throughout the day. It was easy to negotiate through town, and quick enough to dispatch slower cars out in the country. The ABS provided reassurance on some still damp Portuguese roads. And it did all this while looking stylish enough and with zero hassle.

The NC is a commuter’s dream, a newbie’s friend, a riding school workhorse, a carrot for frustrated car drivers, a mile-muncher, a hop to the shop style-piece, the first truly sensible offer for the times we live in. It is all of those things. Is it exciting? No, but don’t let that put you off.

The NC700X doesn’t fail – it’s the thinking behind its conception that’s flawed. It’s a radical departure, just not radical enough.

Looks better than it goes