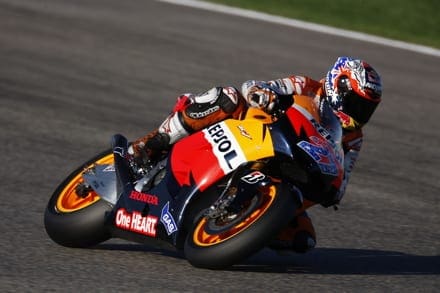 As predicted, Repsol Honda’s Casey Stoner recovered from a back strain and rode his motorbike really fast to claim top spot on day two at Sepang.

Casey was on the pace of yesterday’s fastest times on his third lap, despite pulling a muscle in his shoulder while trying to compensate for his back troubles of yesterday. Stoner set a time of 2:00.8, which is still slow in comparison to last year’s testing. Odds on CS27 taking the championship in 2012?

Next up were the factory Yamahas, led by Ben Spies who was just over a tenth from Stoner. Jorge Lorenzo was a hundredth off the Texan, while Dani Pedrosa was another half a second from J-Lo. Brit Cal Cructhlow continued his love for the new 1000cc M1 to take fifth place. He’s also doing a grand job of spanking his team-mate, although Dovi is still obviously struggling with injury, along with Nicky Hayden.

Perhaps the most interesting news from today’s test was from the Ducati camp. Hector Barbera and his Pramac ‘GP12’ ended up fastest Ductai in sixth spot, with Valentino Rossi a tenth of a second behind the Spaniard and 0.9s from the leaders.

Colin Edwards again, unsurprisingly, led the CRT bikes, but this time Colin had a full-spec 2012 BMW-Suter and was ‘only’ five seconds shy of Stoner’s pace.