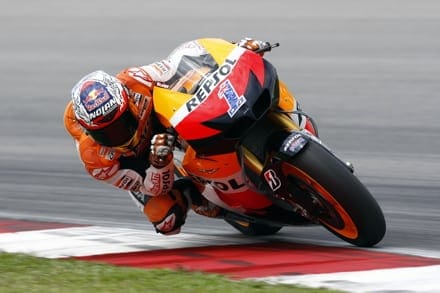 Thunderstorms and heavy rain halted the final day of testing at Sepang, but once again, it was Casey Stoner who set the pace. Stoner, who was sampling the new spec Bridgestone rubber for the first time in Malaysia, set his fastest time of 1:59.6 after just three laps.

The world champ shrugged off some muscular problems to come back and annihilate the rest of the field, having a day off in the process. It makes you wonder who’ll get close to the Aussie and his Repsol Honda this season. We bet the grid is hoping Casey’s impending childbirth will slow him down.

A massive half a second back was Jorge Lorenzo, then times get tighter. Fellow Spaniard, Dani Pedrosa is doing his usual steady progression during testing and was less than a tenth from J-Lo. The other factory Yamaha of Ben Spies was next up and, despite a crash, was a couple of tenths back from Lil’ Dani.

Valentino Rossi, amid rumours of Photoshopping, continued development of the new Ducati and ended up in fifth place. Rossi was 1.2 seconds adrift from Stoner, but only 0.7s behind second spot. Clearly encouraging signs from the VR46 box, with fresh ‘problems’ from the 90% all-new Desmo rather than the old issues of last year.

It was another Ducati in sixth, with Hector Barbera, followed by the Tech 3 pairing of Cal Crutchlow (who had a small crash) and Andrea Dovizioso. Alvaro Bautista was in ninth, still getting comfy with the Gresini Honda after a few years on the redundant Suzuki.

CRT leader, Colin Edwards continues to struggle with major chatter issues (along with some of the big boys) but still got down to a 2:04.7, and only two seconds behind the prototype of Karel Abraham. The other CRTs are clearly struggling, and probably wishing they’d chosen the new Aprilia ART.