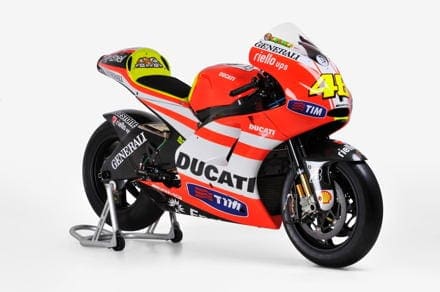 Got a few million quid tucked away? Very rarely do manufacturers offer anyone the chance to own a genuine factory racer, but Ducati has just announced the upcoming sale of Valentino Rossi’s GP11 and Casey Stoner’s GP10.

The pair of GP Desmosedicis will be amongst a horde of sexy metal up for auction at the 2012 Monaco sale on 11-12 May. The ‘CS1’ was built in the Bologna factory in December 2009, and was raced to victory by Casey at Phillip Island in October 2010. The odometer reads 4,232km and it wasn’t crashed, much. Valentino’s ‘VR2’ was built a year later and went on to take a podium at Le Mans in May last season, with its last race being the Dutch TT. Get your chequebooks out, folks. And let us ride them.