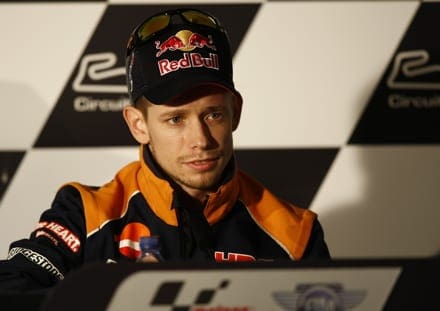 Casey Stoner has announced that he will retire from the MotoGP championship at the end of the 2012 season.

At the press conference at Le Mans Stoner said:

“After a long time thinking, a lot of time talking with my family and my wife, this has been coming for a couple of years now but at the end of this 2012 season I will be not racing in the 2013 Championship. I will be finishing my career at the end of this season in MotoGP, and go forward in different things in my life.

“There are a lot of things that have disappointed me, and also a lot of things I have loved about this sport, but unfortunately the balance has gone in the wrong direction. And so, basically, we won’t be continuing any more. It would be nice if I could say I would stay one more year, but then where does it stop? So we decided to finish everything as we are now.”

Far be it for us to suggest that a lot of the negativity, changes, lack of racing interest, and general lack of ‘racing excitement v safety’ balance, has anything to do with the Australian’s own influence over recent seasons…

Nonetheless, Stoner is one of the most incredibly talented riders we have ever seen on a motorcycle, from any era, and whatever the general opinion is of his off-bike antics, attitude, and demeanour – you can never take anything away from his talent.