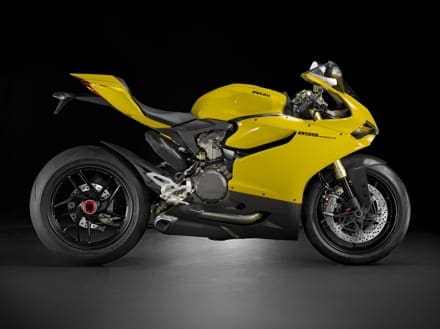 Ducati has enjoyed massive success so far with their all-new 1199 Panigale superbike, grabbing accolades from all directions, and plastering permanent smiles on besotted – if a little intimidated – owners’ faces. So will we see an 849 or 899 Panigale in 2013?

The arrival of an 899 Panigale would redefine the sub 1000cc sportsbike
market overnight. Is this what the new 899 Panigale will look like?

Our Ducati insider smiled the wry smile of confirmation, mixed with the obligatory ‘I couldn’t possibly comment on that’ statement when asked if we’ll see the 849 / 899 Panigale in 2013, while categorically dismissing the chance of another level of sportbike entering below the middle (such as a 696 Panigale to hook riders in from the very bottom of the sportsbike class). So what are the chances? We think it’s a near inevitability.

The 848 EVO Corse SE has all the hallmarks of a last hurrah for the 848 model line. Special paint, special suspension parts, a single seat, and the longest model name you can fit on a fairing all usually add up to what used to simply be called the ‘Final Edition’.  The new Panigale is certain to form the basis of the superbike family going forward, and Ducati know all too well that you have to extract every last drop from successful models, while moving away fast from those that aren’t. Just look at their other recent successes – the Diavel, the new Monster family, and the Multistrada 1200 (for which we’re also expecting to gain a smaller sibling in 2013). All of these bikes have had a strong impact for Ducati, grabbing style-savvy riders looking for something other than Japanese or German efficiency from their ownership experience. Once the launch model has got everyone’s juices flowing, Ducati then branches out with special editions, and range partners. They’ve also learnt a lot from the Sport Classic range, where three retro releases in one hit sadly stirred up almost no interest whatsoever (we believe they were five years ahead of the trend).

With the hard work all done on the 1199 Panigale (plus S and Tricolore versions), Ducati should find it easy to bring an 849 / 899 Panigale to the showrooms. There’s no way that Ducati went to all the trouble and expense of designing the new gear-driven Superquadro engine without thinking of a smaller brother for it. Without volume sales, they’re unlikely to recoup the development costs – and a more affordable superbike is the only answer, although we believe the base model 1199 Panigale actually represents fantastic value for money in context with its peers.

If the 849 / 899 Panigale can enter the market in base for at £10,999, with an S variant coming in at £12,249, and maybe an R or Tricolore at £13,999, the Audi owned Italian factory could see another surge of buying activity. They’re on target to shift all the 1199s in the country this year (750), and the smaller bike is unlikely to be easy to differentiate at less than twenty paces, giving it instant ‘is it, isn’t it’ kudos on the street. It’s also inevitable that it’ll be a less intimidating slice of exotica for the average rider. Triumph’s Daytona 675R currently bosses the middleweight sector with a firm hand, but at £9,999, it’s already dangerously close to falling over the £10k barrier, whereas the MV Agusta F3 already tips the scales at £10,299.

There’s no need to compromise on the chassis and cycle parts for the 899, either. The 848 always enjoyed the benefits of its big brother, and the 849 / 899 is unlikely to be harder done by, especially as economies of scale will only help both models to be more profitable. Just imagine the maelstrom of annoyance in the R&D departments of all the other manufacturers when Ducati release a mid-market superbike with electronic suspension, full Ducati Traction Control (DTC), datalogging (DDA), ABS and anything else they can fit that generates a nice TLA on the spec’ sheet.

All eyes will be on the Milan show (EICMA, 15-18th November 2012) to see what Ducati will bring to the table. We very much hope the 899 Panigale will be part of the news.