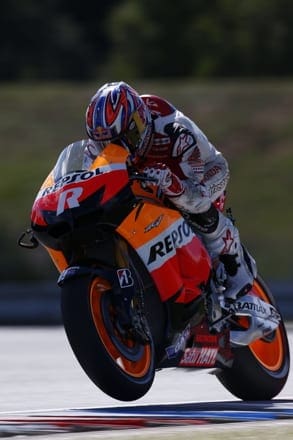 Jonathan Rea has stepped into Casey Stoner’s shoes, having completed another MotoGP Test, this time mid-season, straight after the Brno race. And what a sight this is, a Brit on the best bike in the paddock.

Rea traveled to Brno straight after a difficult WSB race event at the inaugural event in Moscow. Time spent in the dirt didn’t deter Rea (you can see the scuffs on his leathers), who has always had the support of Honda ever since his days as a rookie in the UK. Winning the Suzuka 8-hour event has opened a few doors, that were always looking like there was very little resistance behind them, and this could lead to a fulltime role somewhere in the Honda MotoGP family.

Taking over the seat from the injured Casey Stoner, Rea stuck in 61 laps in the course of the day, ending up three seconds off the pace. Here’s what he had to say in the official release.

“It’s an opportunity of a lifetime for me and I’m thankful to Honda for asking me to be here, although I’m gutted for the guys in the team and obviously for Casey as he is the guy that should be here and I wish him a fast recovery. My first impressions are that the bike isn’t that difficult, it’s the tyres and the way they work that I’m finding hard. I’m struggling to finish off the corner which is definitely a confidence issue as I just need to load the front and find that confidence but it’s my first day and I don’t want to find that limit, or risk overstepping it just yet.”

“It’s great to be able to see Dani’s data and learn where to go fast, that’s a big help. I don’t underestimate how tough a job it is, I just need some time and I don’t feel pressure to perform, it’s a learning process with the team and people around me. It’s been a great day, one of the best days of my life. I’ve been a Honda rider all my career and now to ride the best Honda machine in the World has been a dream come true”.

Check out the Repsol Honda website for more, or head to Rea’s Twitter feed for the low down on the big gig.