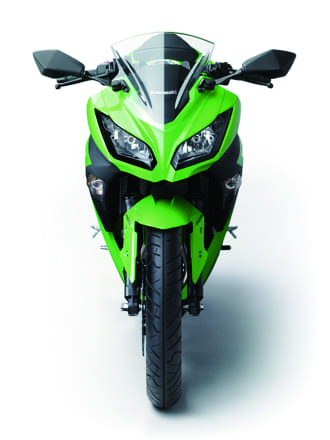 Fancy a little ‘un? Well, the 2013 Kawasaki Ninja 300 could be just the ticket. Obviously based heavily on the success of the Ninja 250R, Kawasaki has upped the stakes in the tiddler class to produce the Ninja 300. Looks pretty good, doesn’t it.

The motor comes in at a now enlarged 296cc. It’s based on the Ninja 250R’s old parallel engine, but both bore and stroke are changed to hit the new displacement.

Power, torque and speed are all up, thanks to not only the displacement, but also bigger intake valves and lighter pistons.

Control of the engine helped by the addition of a slipper clutch – a surprise in this class. It uses an assist cam and slipper cam, so you can slam it down and back this baby in!

The chassis has had a few changes, with the frame getting added gusseting and other subtle tweaks to improve handling and to manage vibes from the motor. Suspension is simple stuff, with preload adjustment at the rear.

Brakes are specced at a single 290mm front petal disc, and there is an ABS option using the world‘s smallest system, that weighs in at just 775g – 40 per cent smaller than the previous Nissin units.

The styling is surely the best feature of the Ninja 300, with ZX-10R aping bodywork that will really see the Ninja getting plenty of second glances. No prices or availability has been announced yet, but watch this space, or head to the Kawasaki website for more information.