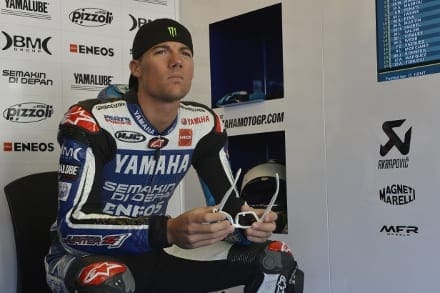 Putting any further rumours to bed, Ben Spies signs for Ducati for 2013. Many had thought Spies may retreat back to WSB, but the current Yamaha man retains a berth in MotoGP – although it’s quite a strange one.

The machinations of a decision are clearly a very private affair, but in jumping from the factory Yamaha team to what many regard as the most recalcitrant machine in the MotoGP paddock, Ben Spies has made life very difficult for himself (check out the Ducati website full the full story). And by joining the Junior side of the team (run by Pramac), alongside Andrea Iannone Spies will have little impact in the development of the Desmosedici.

It’s all a far cry from 2009, when Spies won the world championship for Yamaha, stuck in a few awesome wildcard rides in MotoGP and was regarded as the great American hope for MotoGP. A great rookie season followed in 2010, 2011 saw him take his first MotoGP win and then he walked under a ladder, crossed a black cat and lost his lucky rabbit foot the day of the last race in 2011.

Spies lost that race in Valencia to Casey Stoner, and with it the momentum that was building in Spies career vanished. The first race in Qatar was dogged by chatter that was later traced to a broken subframe. Spies tweeted after the race the this is was you got if you used a crashed bike to race, and this set the tone for the rest of the season. Horrible luck has seen Spies crash, retire, puke up, steam up or just be way off the pace, and the way some in the Yamaha camp dealt with this was to stick a rocket up his arse.

Spies, a Texan, clearly took umbrage at being treated this way and decided to walk before he may (or may not have) been pushed. Either way, he was a free man in the market and his stock only rose to that of the Pramac squad. We admire the man’s principles, and hope the Pramac squad doesn’t weigh around his neck like it has for so many of its former riders…