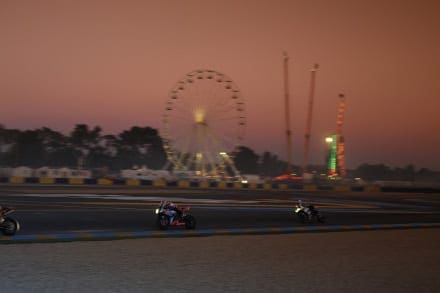 Le Mans 2012 was an absolute classic. Super close racing, championships at stake, sunny skies, crazy bikes, mad crowds and a nail biting finish were all evident throughout the 24 hours. But, as ever, it was the event itself that was the star of the show.

A new record distance traveled was set by winners SRC Kawasaki on a ZX-10R – a massive 3,532.14km – 884 laps (10 more than in 2011). The team comprised Julien Da Costa, Grégory Leblanc and Freddy Foray and the win meant the team has won the race for three ties in a row.

Second were SERT Suzuki – on the same lap after 24 hours of racing – and that was enough to win them the FIM World Endurance title. Third was the BMW S1000RR No.99 or Gimbert, Nigon and Cudlin who had to settle for second place in the Championship in 2012. Honda TT Legends finished fifth.

The event was watched by 66,000 nutters, some known to this magazine, so their exploits may be detailed in Fast Bikes…

And here’s the FIM’s video take on things…