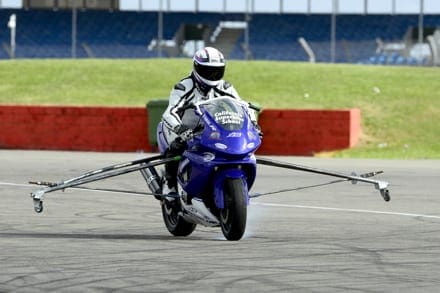 As we approach the end of the UK season at CSS a number of the instructors got together on Tuesday for a bit of internal tuition. I was one of few invited guests to join them and re-familiarise myself with a couple of the tools of their trade and indeed get introduced to one that I have never experienced.

The Off-Track training day is designed to give the guys a rare opportunity to ride all of the specially modified training bikes, and allow the newer guys the chance to draw on the experience of the longer standing instructors. After their morning past students came in to once again ride the rigged Yamaha’s and sharpen skills learnt from levels 1 to 4.

So given the opportunity to join the instructors I also got to have a play. Starting on the hydraulically powered static bike we went through body position in turns, in braking and movement across the bike. You will have seen this bike at the NEC and other shows over the past years and enables the instructors to scrutinise your movement up close and fine tune every element of your riding style.

It was then the turn of the brake bike, an odd looking machine with out riggers that save the odd uncontrolled front wheel slide. A second set of bars at the top of the screen, complete with a throttle helps to dispel the rumour that all of your steering comes from your body – bloody odd that exercise and instantly uncomfortable. However jamming the front brake at 35mph and deliberately losing the front, easing off the brake and regaining control is a real eye opener.

Following loss of the front came kicking out the rear on the slide bike. Hollywood took us through our paces, circling him and at a certain point opening the throttle, throwing the back out and then learning to regain it. This was brilliant and is a level four module so I was delighted to be able to get this taster. This was for sure the favourite and when you watched the instructors training and properly spinning out the back wheel you know why you come to CSS to improve your skills, because these guys have bucket loads of the stuff. To finish the morning I demonstrated my counter steering to Spidey and with a few tweaks he had me turning tighter and more deliberately with a few concise suggestions.

This was the first time the school had run this Off Track day but it was great success, not only for the instructors but for the students in the afternoon too. Look out for this next year when 2013’s dates are announced. Oh and I will let you into a secret – The first four dates in April have been confirmed as 4th/5th on Silverstone’s Stowe, and 23/24th on the National Circuit get on to www.superbikeschool.co.uk for more info and contact details.

And so after the final Advanced Riding Technique (ART) to be held on Copse on October 12th CSS and a number of the UK instructors will jet off for warmer climes in South Africa, Greece, Turkey, Abu Dhabi and India. I will face the prospect of the darker nights, wet roads and less favourable riding conditions – at least I will be better prepared for the occasional “Slip”…

Thanks to Glenn, Badger and all at CSS.