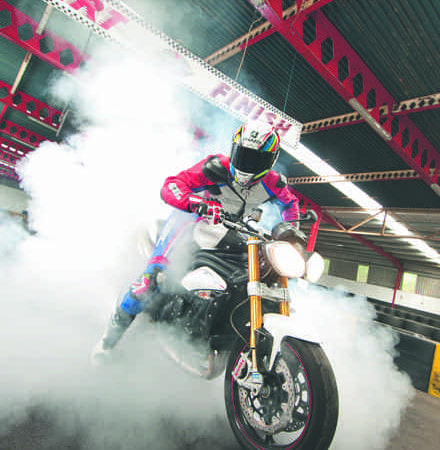 We regularly play a game here at Fast Bikes. In the name of testing (and small wallets), we use every drop of gasoline in the tank and test the reserve light, praying another FB member is around for a roadside rescue in case the inevitable happens.

This morning, while delicately nurturing the Speed Triple into the office with 20+ miles on the reserve trip, it got me thinking about ways to preserve fuel. The obvious methods like not tempting the valves through the cases with massive RPM, not blipping on downshift, and a nice smooth progressive throttle, are a given, which again that got me thinking.

Cal Crutchlow played the petrol game at Motegi. And lost. With only 21 litres of gas allowed in prototype MotoGP bikes, every millilitre counts. As Stavros Parrish announced at Sepang, some riders scrubbed their race tyres in on the spare bike and pitted again to jump on their race bike before joining the grid. Some reckon that because he had a lonely race (until his battle with Bautista) and no-one to slipstream, Cal ran out of go-go juice. He was also trying his little gonads off, desperate for another podium.

The electronics used are clearly very complex. Riders often switch fuel maps (usually indicated on a pit board) towards the end of the race to aid fuel consumption, and although team-mates share the same(ish) bikes, the riders’ styles and riding habits are massively different. Cal has come from a four-stroke and Superbike background, so relies on engine braking on corner entry, which uses fuel. He’s also much more aggressive on a bike than Dovi, or Jorge ‘Mantequilla’ Lorenzo, so that must use fuel.

Meanwhile, on the Speed Trip’, I was coasting down hills in fifth or sixth gear and running into corners with bugger-all engine braking. It got me panicking a tad, but at least I made it into the office for a podium.