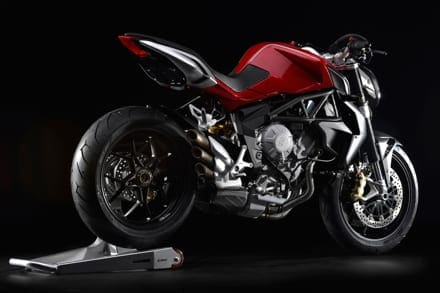 Hot on the heels of news that MV’s new Rivale is due to be revealed, MV Agusta went and threw another hot potato on the fire – the new Brutale 800.

Using an engine based on their own 675cc three-cylinder, MV has created another step in the Brutale range. Now it goes from 675, to 800, to 920 and then up to the 1078cc top-spec’ nutters. That’s a Brutale-tree you could be climbing your entire biking life.

The engine has a counter-rotating crank, just like the F3, and is producing a claimed 125bhp at 11,600rpm with the redline stopping play at 13,000rpm. A larger version of the F3 motor, we are very interested in trying out as it’ll no doubt be bananas!

It also comes with the same electronics system as the F3, which means 8-level traction control and the ability to adjust everything from throttle response and mapping, to engine braking, and much more.

The frame is the same style as other Brutale metal, a mix of trellis and aluminium plate. The forks and shock are new to MV though. The 43mm Marzocchi fork is fully adjustable (Something sadly missing on the Brutale B3), while the Sachs shock is likewise blessed with knobs and twiddly-bits galore. The whole shebang weighs in at 167kg dry.

The best part? We wait to see how much they’ll be exactly in the UK, but MV is aiming this on mainland Europe for around 9,990 Euros, which should mean it’s sub £10,000 in Blighty. That’s another well priced MV to snatch your hard earned pennies.

We’re really looking forward to trying this bad boy out!