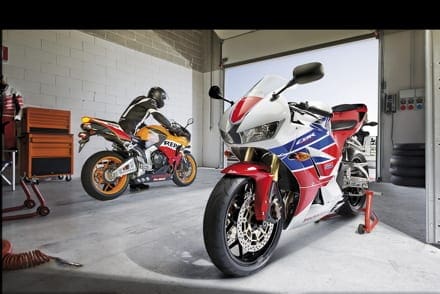 Honda has been concentrating with the small stuff for 2013, but we do get a new CBR600RR to drool over, which is nice. Elsewhere, there’s an A2 friendly CBR500R and a pair of CB500s for doing the mundane stuff and flogging into training schools.

The 2013 Honda CBR600RR is given a set of MotoGP style fairings, 41mm Showa Big Piston Forks, a revised rear shock, 12-spoke wheels and remapped fuel injection and air intake control settings. So it’s a mild revision, but welcome all the same. We’re not promised anything more in terms of power, merely added control with the suspension changes. We’ll detail the specific stuff later in the week, so stay tuned.

The 2013 CBR500R is a nod to the new licence laws that are being introduced in January 2013. Using what Honda calls design cues from the CBR1000RR. The bike uses a 471cc parallel twin motor to kick out its 35kW at 8,500rpm. Claims of 76mpg are being made, so it looks as if it’ll be a frugal little lump, suitable for the times. Styling is obviously based on the bigger bikes in the range, and good use of colour schemes ensures it gets lumped in with the CBR cousins. It uses a steel diamond frame, with a 1,410mm wheelbase and weighing in at 194kg. It’s going to be used as the bike in the European Junior Cup, so expect to see it wazzing round at WSB rounds.

The two new CB500s offer modest performance in stylish chassis. The CB500X borrows much from the adventure market that Honda is making great strides in, and it uses the parallel twin engine from the CBR500R. The naked version, the CB500F looks a funky little number, certainly as good as the 600s in the naked range, and should make a cracking little town bike.

Head to Honda’s website for more details, and tune in throughout the week for coverage and in depth analysis of the bikes and bits shown at the 2012 Eicma show.