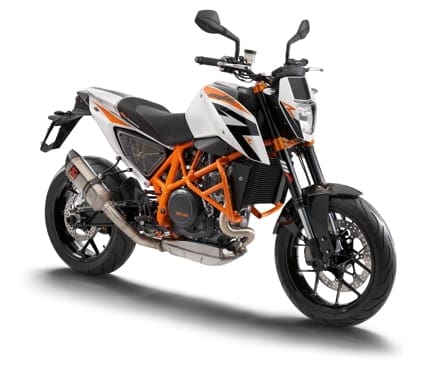 Hot on the heels of the new KTM Adventure comes two more playful pups – the 390 Duke and the 690 Duke R. The 690 version is obviously a breathed on version of the current bike, but the 390 is a fresh capacity to capture the new A2 licence laws.

Bigger than the 200 Duke, the new 390 is still a single cylinder machine, but a whole lot bigger. Boasting 44bhp from the 375cc engine, there’s plenty of grunt there and that should make it a decent machine to fling around town – especially as it weighs just 150kg fully fuelled.

The 690 Duke R uses a higher chassis in 2013, with stiffer springs and more damping than the 2012 version that was raced in the European Junior Cup throughout this year. We’ve not got much more than that, probably because there isn’t much more to tell. But it should still be a proper hoot. For any more info head off to the KTM website.