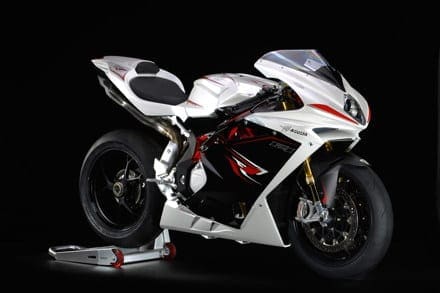 After unveiling some sexy naked machinery in recent weeks, MV Agusta has released images and details of their new 2013 F4 range, now split into three options of the F4, F4 R & F4 RR.

The vanilla F4 features many of the tweaks of the other two, including new exhaust, wheels, lights and an expanded electronics package where you can control everything from traction-control to engine-torque, anti-wheelie, engine mapping and so on. Forks are fat Marzocchi items and the shock is from Sachs.

The big news is the F4 RR, it’s the one with the most significant changes – electronic suspension. Running a very similar Öhlins system to Ducati’s Panigale, you are now able to adjust suspension settings via the handle-bar and multi-function dash. It also comes with preset modes installed, and also an Öhlins electronic steering damper, too. The RR is a single kilo lighter than the F4/R.

Prices for all three will be…