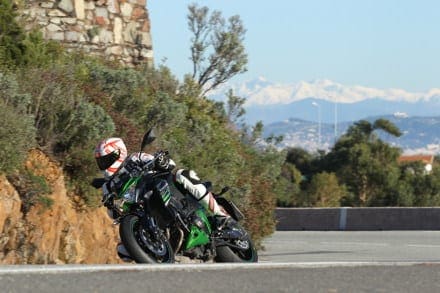 BJ has come back from Monaco absolutely raving about the new Zed. And what timing – it’s the 40th anniversary of Kawasaki’s iconic naked hustler next year. Like the Transformer looks?As you can guess from the name, Kawasaki’s motor engineers have been busy with an improved engine to replace the Z750’s ageing lump, but the 806cc powerplant isn’t just a simple bore and stroke job. Refinement is the key word, which means a smoother and less revvy ride but just as fun, and the Z800 is still an awesome stunter – a couple of teeth added to the rear sprocket probably helps. Throttle bodies are bigger, and work to the cylinder head boosts low-mid power, among other detailed work.

Beej also mentioned just how beautifully balanced the 800 is. Although she’s packing 40kg more than its main rival (Triumph’s Street Triple), he reckons you can’t feel the mass during a thrash, and coped well with the twisties around Monte Carlo. Like the motor, the Z750R-based chassis has had lots of changes throughout, including geometry tweaks, rigidity revisions, bigger brakes, and a new-ish swingarm, which all equal a more nimble and stable ride.

It’s safe to say from BJ’s first impressions that any Z750 owners should trade your old dog in for the new Z800. It’s also well priced at £7,449 and there’s an A2-friendly 95bhp model that can be restricted. But is it better than the Street Triple? Get the full verdict in the next issue of Fast Bikes – on sale 8/1/13