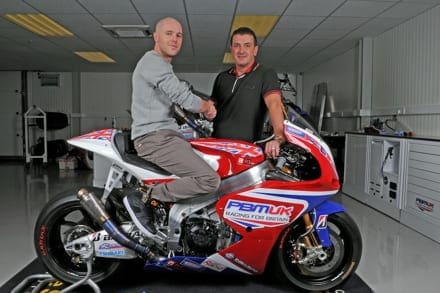 As we told you last week, Michael Laverty has been officially welcomed into Paul Bird’s PBM squad for an assault on the 2013 CRT ‘championship’ in MotoGP. The FIM released the entry list last week before all the contracts were agreed, and any announcements had been made, but now all is well.

M-Lav will partner Columbian nut-job Yonny Hernandez in Bird’s team, with Yonny riding the ART machine that was campaigned by James Ellison in 2012. Laverty will be riding a brand-new bike built and developed by the PBM team in the UK, overseen by tech-guru Phil Borley. Whatever it is, it sounds exciting.

This isn’t the first time M-Lav has ridden for Paul Bird – the 31 year old won the British Supersport series in 2004 on the MonsterMob Ducati 749 and went on to race for Birdy in his Stobart British Superbike team in 2005/6. Birdy will continue his commitment with BSB and Shane Byrne in 2013.

Michael Laverty: “I’m really excited about racing in the 2013 MotoGP series; I’d like to thank Paul and the guys at PBM UK for giving me this opportunity. I will be riding an Aprilia powered PBM machine with the new chassis and control electronics, I can’t wait to get started pre-season testing at Sepang in early February. I will have to adapt to the Bridgestone tyres and carbon brakes plus learn a few new circuits along the way but I hope to be challenging for top CRT honours. There are some experienced riders on CRT bikes so I am certainly not underestimating the challenge. It’s great to be back with the PBM team, having spent three years there I should easily slot back in, next season makes PBM the team I’ve spent the longest with so far in my career. It is going to be an interesting season with a lot to learn but I’m really up for the challenge.”