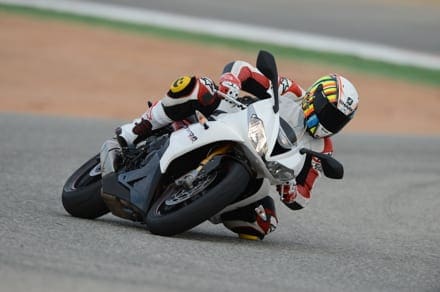 On paper, the 2013 675R gains 3bhp and loses a kilo. But the result is far more effective. A virtually all-new engine has a bigger bore and shorter stroke, and is treated to another 500rpm before the limiter intrudes. A host of other internal magic means the motor has less inertia and spins with more verve. As well as the addition of a slipper clutch, the Daytona also has twin injectors per cylinder for peachy fuelling.

Although the looks are quite similar, the chassis is also effectively box-fresh. The underseat exhaust has been ditched in favour of a mass-centralising, under-engine unit, which means the whole balance and weight distribution of the 675 had to be changed. Geometry has been sharpened up, so steering is quicker and the 2013 Daytona is even more able in the corners. Revised Öhlins at the both ends also adds agility and sorts those nasty bumps.

Triumph has also added ABS to the 675R (an option to the standard model) and it’s really very good. The multi-mode system only weighs 1.5kg and in ‘Circuit’ mode, it becomes a track ally – unlike most ABS systems.

The press launch was held at Cartagena in Spain, and is a proper test track, loaded with UK-style territory. It’s safe to say that, after three years development and lots of money, the 2013 Daytona is obviously better. But how much better? At £10,599, the 675R is an expensive toy, particularly when a few litre bikes cost less. Is it worth it? You’ll have to get the new issue – out on 8/1/13. We also tagged along with Bike World for some awesome TV/video footage, and you’ll be able to see the 675R and Fast Bikes in action on the 3rd of January at 9pm on Motors TV. Happy New Year!