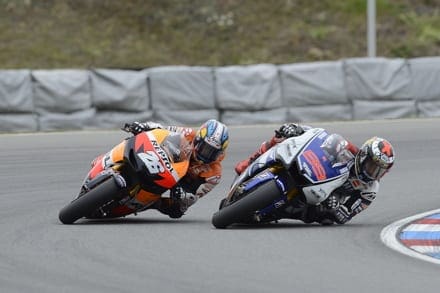 Jorge Lorenzo did exactly what he had to do in 2012. Having established an early lead, he rode with his head for the rest of the season – ensuring that it was his rivals that made the mistakes. A deserved second MotoGP world championship was the reward, and with Casey Stoner’s retirement he must start the 2013 season as series favourite. Here are some of the best shots of Lorenzo’s season.

Number One: While his team-mate, Ben Spies, was running around on a crashed and broken subframe, Jorge Lorenzo was riding hard – and smart.

Number Two: On form like this, it was no wonder that Lorenzo was the man to beat in 2013.

Number Three: The new Blue livery in Misano had the desired effect – Dani Pedrosa got punted off!

Number Four: The race of the year at Brno saw Lorenzo lose the battle, but he eventually prevailed to win the war…

Number Five: Before the rain came in Malaysia, Lorenzo looked absolutely awesome – even with the weight of the world on his shoulders.

Number Six: The world championship came at Phillip Island – a good job too, because he fell off at Valencia!