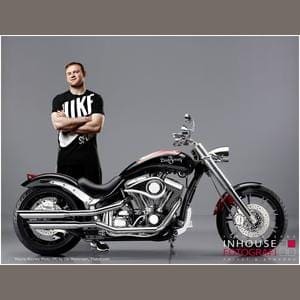 Wayne Rooney’s stuck a bike up for auction – yep, you read that right. This is a custom-made machine built in conjunction with the footballer and custom bike builder Uffe Lauge Jensen.

Prices for these Lauge Jensen bikes kick off at the £56,000 mark, so it’s not a cheap machine. Whether the Rooney autographs and influence add or detract to the figure remains to be see – although the diamonds encrusted into the shift rod should up the value somewhat. The auction takes place on 20th February in Chester and all money raised will go to Danish charity KidsAid. For more information head to the Bonham’s website.

Here’s the blurb from auctioneers, Bonhams – you can just imagine Rooney saying it all, can’t you…

‘When first approached about the possibility of being involved in the design of a unique “Wayne Rooney” Lauge Jensen custom bike, I was really excited to have the opportunity to be involved,’ said Wayne. ‘The bike we have designed takes its inspiration from the celebration of my overhead kick against Manchester City last season. The goal has been described by others as being of the highest quality, technical excellence, powerful and beautiful. I hope you will agree that the bike is all of this and more.’