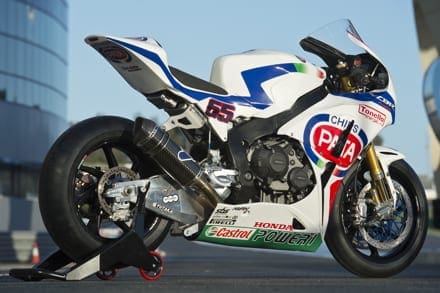 The ‘new’ Pata Honda squad has just completed the first test of 2013 in Jerez, Spain – and their final test in Europe before the season begins. The British riders in the superbike side of the garage, Jonathan Rea and Leon Haslam .

Seeing as the WSB series now goes to Jerez, it seems a good place to go, and testing the new MotoGP-derived electronics package, heavily revised swingarm and all new Termignoni exhaust system.

However, things on the electronics side didn’t go to plan, and the team spent much of the test time trying to iron out problems here. A spot of rain also saw the team struggle to get anything meaningful from the trip to Spain. The two riders had the following to say on the matter.

We’re not really where we want to be right now because we couldn’t get as much out of these two days as we would have liked. Some things just can’t be fixed on site and the electronics problem we had was one of those. The system was taking too much power away so we really needed more track time to sort that out. However, I felt some good things, like it’s catching slides a lot more safely now, so that’s encouraging. It’s been a frustrating test and shown us that we need more track time before the first round, but that’s coming in Australia, so we’ll hope for better luck there.

It’s been a long, tough couple of days and frustrating in a lot of ways. We had some electronics issues and what we thought were engine braking problems. They turned out to be a problem with the brakes themselves. In the end, we changed the pads and threw in a random electronics package and I got maybe four or five laps towards the end of the day. It’s been one problem after another but those last laps showed that the bike is going to be good. It was a much needed test but ended up as a frustrating one, so I can’t wait to get back on it in Australia.

We had some big problems on the first day with some glitches in the new electronics, so we had to wait to get a new software patch written and downloaded. The track conditions were not great either, so in reality we could only work in the last two hours or so of the test. In that little time, I think the guys did a great job and Jonathan was able to do a lap of 1m41.6s. Leon had some brake issues today, which set him back a little, and he was using Jonathan’s electronics settings which didn’t really work for him. The bike is working well though and the new components are performing as we want. We have some more parts to test, so we could do with more than the four testing days we have remaining before the start of the season, but we’re in quite good shape for now.