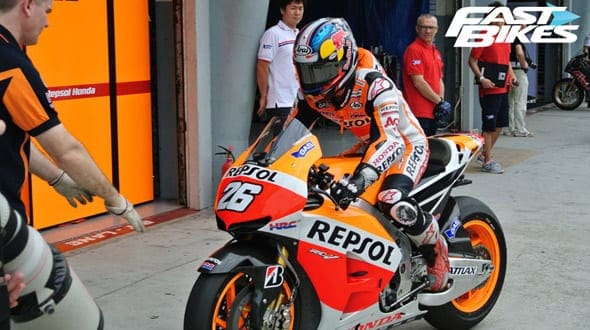 Dani Pedrosa, once again, was quickest on the second day of testing at Sepang. Dani and second-placed Jorge Lorenzo edged away from the rest of the field and got closer to J-Lo’s record of last year, lapping in the 2m00s regularly. Marc Marquez finished the day in third again (also dipping under 2m01 barrier), while Valentino Rossi ended fourth and consistently faster. That’s one happy camper.

The all-British Monster Tech 3 team upped their pace too, with Cal Crutchlow just behind Rossi and Bradley Smith improving by a massive 1.5s to sit eighth, just 0.6s from Cal. The Ducati boys also went quicker and managed to outpace the barrage of Japanese test riders. Dovi looks more comfortable and that shows in his times.

The Aspar pair of Aleix Espargaro and Randy de Puniet, just shy of some factory prototypes, unsurprisingly headed the CRT brigade. And Michael Laverty continues to impress on the PBM bike, beating teammate Yonny Hernandez and improving over yesterday’s effort.

There’s no doubt that 2013 is going to be a banger, with Mr Rossi back and the introduction of MM93. More tomorrow!