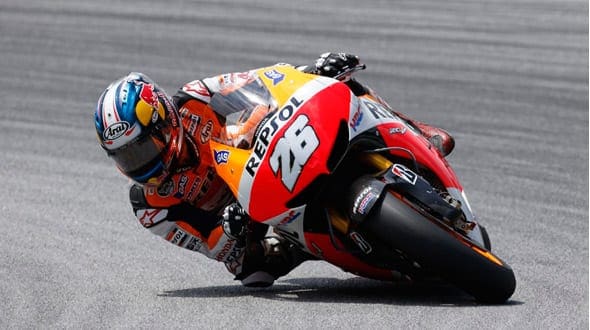 Repsol Honda’s Dani Pedrosa finished the Sepang test fastest overall, nearly 0.4s ahead of reigning champ, Jorge Lorenzo. Valentino Rossi picked up his pace today and was only just over a tenth from J-Lo.

Marc Marquez had his first crash at big school but set his fastest time as soon as he got back on the RCV, finishing the day in fourth, just ahead of Monster Tech 3’s Cal Crutchlow. Cal and Ginger Wizard, Bradley Smith, sandwiched the satellite Honda pairing of Bradl and Bautista, and continues his impressive pace.

The Ducatis are, again, painfully slow, with Nicky Hayden and Dovi a clear two seconds off the pace. Rookie Andrea Iannone gathered pace towards the end of the day, but is still slower than the first of the CRT boys, Aleix Espargaro on the Aspar ART.

But probably the most impressive performance of the day has to go to Michael Laverty. M-Lav finished the test in 15th, second fastest CRT, faster than some prototypes, on a bike he’s never ridden before, and a track he’s never seen. The new PBM bike looks to have silenced a few doubters. Rule Britannia. 2013 is on!