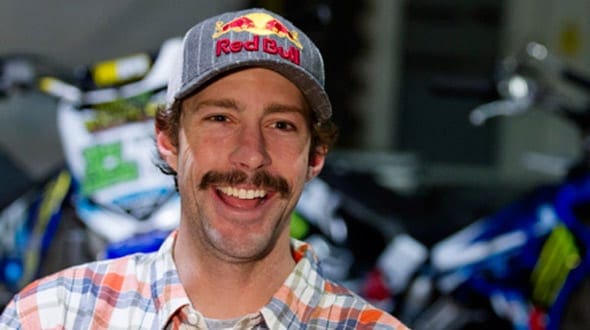 Ahead of an attempt by Travis Pastrana and the Nitro Circus crew to do some mega stunt involving a million back-flips, here’s an interview with the legend on what’s going to be happening… And don’t forget, you can have a chance to win ten pairs of tickets to see Nitro Circus: The Movie 3D by entering our competition.

Q.  What is with Nitro Circus and world record attempts? You guys seem to do them for fun…

A. That’s exactly what we do. This stunt is going to be pretty interesting because it’s so many bikes and so many riders. We’ve got our general guys that we put up there and we probably have 10 guys that can do the side-by-side pretty consistently. But now we’re going to have 20 so there’s going to be guys going in both directions so if anyone’s off their mark and everyone comes down out of the sky it could look pretty bad if anyone messes it up. I’ll be excited to watch and see how it goes down.

Q. Has a stunt (most simultaneous backflips) like this been attempted before?

A. Honestly until last year there haven’t been enough riders that (a) could do the flips at this distance and (b) could do them with consistency to be as close as they need to be to everyone else. Until this point just to have 10 guys all going in the same direction is something that scares you every time. I had a big crash during our second live show we ever did in Australia attempting something similar. One of our guys had gotten hurt so we brought in another guy who was doing his first Nitro show. We all knew him but he just came up and clipped the guys around him and crashed. Bilko (Blake Williams) went down and blew out his knee and there was like seven of us that were all on the ground, all either knocked out or had the wind knocked out of us. None of it was our fault it was just one guy making a mistake. It’s one of those stunts that a lot of people don’t like to put their lives in other people’s hands. This time though we’ve got 20 of them who are willing to do it. The backflip has become more and more of a standard trick and now you’ve even got guys doing double backflips. It’s going to be pretty spectacular though.

Q. Will there be extra pressure on the riders with the stunt being streamed live?

A. There’s a lot of extra pressure. One of the cool parts of being inside or doing a stunt in your own time is that you can wait for the wind to die down or if the ramps are wet from fog or rain you can wait. In this particular instance no matter what they have got to jump and it just puts a lot of pressure and added stress.

Q. Will riders get a second chance if they don’t complete it on the first attempt?

A. If they don’t get it on the first go there’s probably going to be a few injuries so I don’t know. They’re going to have a few extra guys in case guys get hurt in practice but like I said every time you add someone new you take the risk factor up and multiply it. There is time for them to do it again but I highly doubt if they mess it up there’s going to be enough riders to get the stunt done.

Q. How much preparation goes into a stunt like this?

A. Everyone for this one is doing their training in their part of the world. But we’re just in the process of building a training facility next to my house. We’re building a full on Nitro training ground. It’s state of the art with new ramps and safe landing areas. As we’re getting bigger and bigger it’s difficult to maintain that level of intensity every day of the show. There are always going to be injuries when people push themselves as hard as they can. So we’re going to need more guys that can do these ramps and do the stunts that are spectacular. This is going to be a huge stunt for us and a huge step for action sports.

Q. What kind of feelings do you get when you land a world record stunt?

A. Without a doubt it’s pretty cool because you know you have done something that no one else has done. For me it is cool because world records are always changing and evolving and getting bigger and scarier.