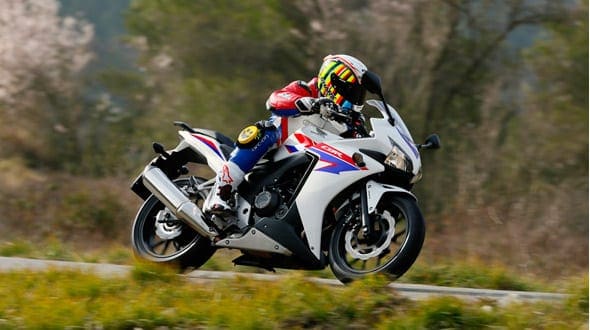 Honda’s 500s have been designed to bridge the gap between 125 L-platers and supersport bikes. Jumping from a 125cc four stroke and ‘upgrading’ to a 250cc has been a pointless task of late, as performance is very similar. Kawasaki’s Ninja 300 and now Honda’s 46bhp CBR500R offer a tangible boost.

The parallel-twin motor (which is actually 471cc) is the first Honda engine to be built outside of Japan. There’s some clever tech involved and the CBR impressed on the roads around Barcelona with a lively midrange. With a claimed 80 miles to the gallon, the super-smooth CBR also looks after the wallet.

Weighing in it at 194kg, the 500R’s mass should be treated as just a number, as the handling is light and frisky. We caned the CBR around the Parcmotor circuit (the home of Fast Bikes Sportsbike of the Year for the last two seasons) and it never once felt like the no-nonsense, budget bike it’s supposed to be. This bodes well for the 32 teenagers who have entered the European Junior Cup, all thrashing the CBR500R alongside the World Superbike circus.

Styled on the CB1000, the CB500F is identical, bar the more upright riding position and a few fairing panels, and is much easier to hoist a mono. Fun, easy to ride, well made and priced at under the evil £5,000 mark, Honda should be onto a winner with the new breed of 500s. Read the full launch report in Fast Bikes, out on the 28th of March.