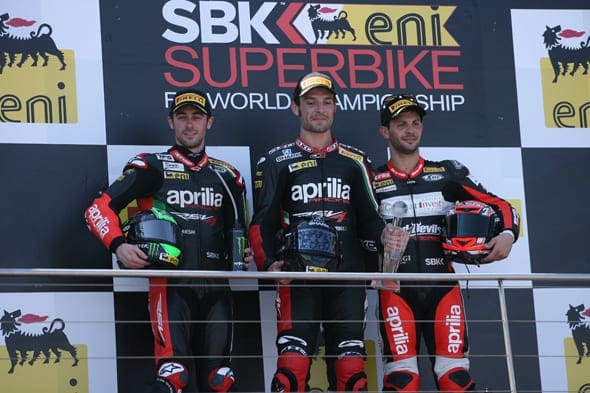 The 2013 World Superbike season kicked off this weekend, and if the first few races are anything to go by, every man and his dog will be wanting an Aprilia to ride this year.

Aprilia Racing flew out of Australia with two wins after Eugene Laverty and new boy, Sylvian Guintoli, each grabbed a victory, and the RSV4 filled five out of six potential podium spots at Phillip Island.

Carlos Checa’s promising weekend on the Panigale was soon over after he took out Marco Melandri, but it was the Spaniard who ended up with a free helicopter ride to hospital. He was released today after being treated for major concussion.

The second race was more of the same, as Guintoli tried to make a run at the front and was followed by Laverty, Fabrizio and also Melandri. Laverty made three overtakes in the last few laps to take victory and a new lap record, with Guinters second and Melandri third.

Chaz Davies had a ‘moment’ braking at Lukey Heights and took out a helpless Loris Baz. Chaz remounted and went into the pit lane for a new tyre, but was handed a ride-through because of a technical infringement – he didn’t get off the bike as the team were changing wheels.

The World Supersport championship looks like it’s going to be a two-horse race, as Kawasaki’s Kenan Sofuoglu took the win ahead of Sam Lowes onboard the Yakhnich Yamaha. Lowes’ R6 was visibly slower in a straight line (perhaps it’s a 636cc motor in the ZX6?) but Sofuoglu pulled the pin with a few laps to go and set three fastest laps in succession. Surprise of the weekend went to Pata Honda’s Michael van der Mark, who took a podium on his WSS debut. Keep an eye out for this kid.

Now we have to wait seven weeks for the next WSBK round in Aragon, Spain.  Still, MotoGP test at Sepang tomorrow!