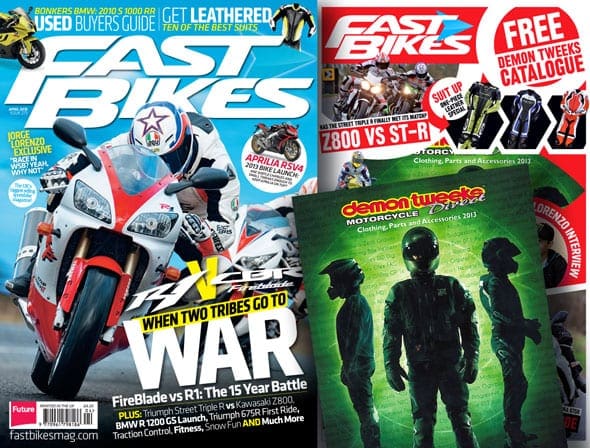 Get yourselves to the newsagents, digital or otherwise, and get yourself the new April 2013 issue of Fast Bikes Magazine NOW! It’s crammed with stacks of bikes old and new, features galore, product reviews, racing, masterclasses and even the odd lady thrown in for good measure. There’s also a free Demon Tweeks catalogue for you to drool over. Unless you can’t pronounce your F’s and Th’s, you can’t say fairer than that!

To kick things off we jump on some new bikes. The new 2013 Aprilia RSV4 Factory gets a run out in Estoril to see whether small changes made to the machine will add up to another sure-fire Sportsbike Of The Year Title. Then it’s out to South Africa to check in on the new world shrinking BMW R 1200 GS. Back in Blighty, we run the new Triumph Daytona 675R for, er, 675 miles round the West Country to see if there are any chinks in its armour.

Then we get to the big test; the Yamaha YZF-R1 takes on the Honda Fireblade family as we put both stables to the sword. This battle has been raging for 15 years now, and there are no signs of it letting up with the 2013 bikes the best ever. Then we find out that the new Triumph Street Triple isn’t going to have everything its own way in 2013 as the stunning Kawasaki Z800 is in with a shout of taking the naked middleweight crown from the British star.

After that, Fagan goes toe-to-toe with James Toseland and Danny Kent – in the gym – and proves that he’s got no hope here, either. So he then dons his off-road kit and heads out in the snow to go and have a play with Mick Extance in the white stuff. We check out the latest and very definitely the greatest in terms of aftermarket traction control and show how it makes riding faster – and safer. We then get 10 minutes with Dickey Beer, a stunt coordinator supremo, and chat about stunts, bikes and Stormtroopers…

After that, we check out possibly the trickest KTM RC8 in the land, with the help of one of our fine models, round up the best leathers you can buy this year, learn lots with all our Masterclasses, check out the staff and project bikes, hear what you lot have got to say and see where you’ve been, then we go racing and learn more about the phenomenon that is Spanish superstar Marc Marquez, and also get an exclusive interview with Jorge Lorenzo. You know, the MotoGP world champion.

If you didn’t know already, we’ve gone digital bonkers, so you can download Fast Bikes on your Apple or Android device and get some fruity videos embedded in the Apple product…

It’s another stacked issue absolutely rammed with goodness. We loved making it and hope that you’re going to love reading it!