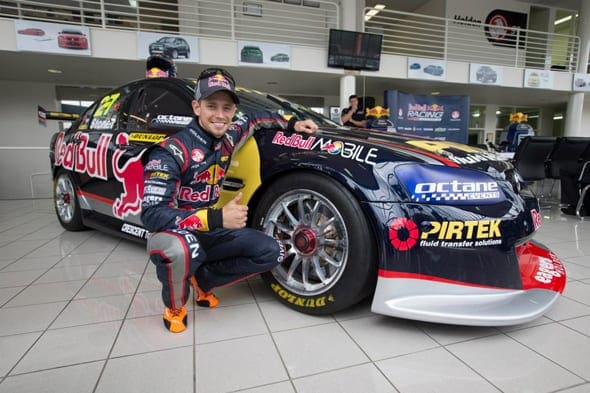 After getting pissed off with MotoGP, two-time world champion Casey Stoner will make his V8 Supercars debut this evening (Aussie time) in the #27 Red Bull Pirtek Holden. It’s also the first time an international motorcycle racer has crossed over to V8s since 1987 world champ, Wayne Gardner.

In open practice yesterday, Stoner finished ninth (from 30 drivers) and was just 1.2 seconds off the fastest time. “I can’t wait,” said Stoner. “It’s exciting to finally get the chance to be at a race weekend after so much time thinking about it. I think it’s going to be fantastic and I’m very much looking forward to it. Everything’s gone pretty smoothly so far but until we’re on the track there’s only so much we can do. But the team has been great and helped me out in absolutely every way possible and I’m very excited.”

Always keen on safety when he was a MotoGP pilot, Stoner now has to get used to shifting over a ton of four-wheel metal around a track, and also adapt to the street circuits in Oz. “It’s a little nerve-racking,” Stoner said. “It’s something very alien to me racing a car let alone with walls each side of me and not something I’m completely natural with yet, but I do want to go out and enjoy it. I have a fair idea of what’s involved, but unfortunately nothing can really replicate what I’ll have to do when I get out there.

“I have no idea where we’re going to be running,” he said. “I first and foremost want to enjoy it, but, you know, I’m a competitive driver, I’ll still come out and we’ll see where our results end up. But at this point we have no real goals set, just to try and learn as much as we can, pick up what we can and see where we end up at the end of a weekend. I’m not expecting too much too early. But the racing looks like a heck of a lot of fun, so I’m looking forward to getting out there.”

As he prepares to get behind the wheel of his 640 horsepower Holden, the 2011 MotoGP champion admits to feeling more trepidation than he did than making the transition from 250GPs to the top category.   “It’s very different,” Stoner said. “Back then I’d been racing bikes my whole life, and of course I was a little bit nervous. When you step up the different classes, because it’s all generally the same on two wheels, it’s not a big thing, but for me moving from two wheels to four wheels is something I’ve never done before. I’ll be a little more nervous, for sure, than I was going into MotoGP. But I’m also very excited.