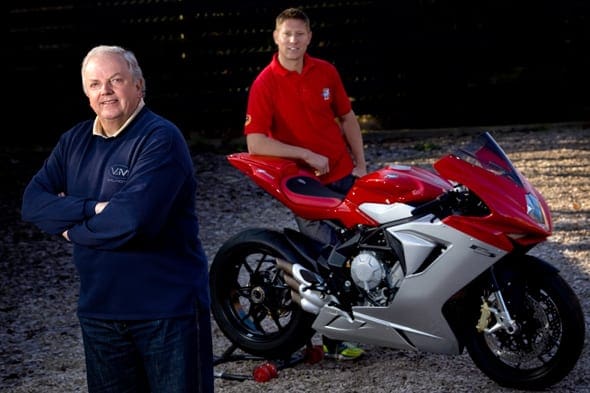 It was revealed yesterday that MV Agusta would be back at the TT races in an official capacity, with Jack Valentine resurrecting his ValMoto banner. Big Jack has hired the services of TT-winner, Gary Johnson, and the team will work closely to the ParkinGO World Supersport squad to share development and set-up knowledge. ValMoto also plan to enter the North West 200 and Ulster GP.

Team Owner, Jack Valentine, said: “This is a project that I’m extremely passionate about and I am only embarking on it because I’m confident that victory is within our reach. Having spent the last few years working for manufacturer teams in BSB and WSBK, it feels good to be bringing ValMoto out of retirement and returning to the roads seems a fitting and high profile way to make our return. Gary is an extremely talented rider and the F3 675 is a great bike – I’m sure the pairing of the two will be a recipe for success and a reason for me to celebrate another successful TT.”

Meanwhile, back in the Honda corner in an attempt to stop Kawasaki’s domination, nineteen-time TT race winner John McGuinness has confirmed that he will race in this year’s Lightweight TT onboard Honda’s all new CBR500R.

The Morecambe man will ride for Phil Morris’s RLR racing team, which has already begun preparing the CBR500R. McGuinness last road for the team close to a decade ago when he took back-to-back victories at the Lightweight TT onboard a Honda VFR400.   Last year’s Lightweight race was dominated by riders onboard Kawasaki’s ER6. Ryan Farquhar took a convincing win with a time of 59:29.27 (114.155mph) from James Hillier with Michael Rutter completing the podium. Michael Rutter clocked the fastest lap of the inaugural race and his time of 19:35.45 (115.554) will be the benchmark to beat in 2013.

The top eight positions in the 2012 event, the first TT run for Supertwin machines, were all secured by Kawasaki riders, but the dynamic of the race is set to change in 2013 with McGuinness’s entry – and we also have our very own JHS Racing plans to be announced soon. Ryan Farquhar has retired from racing, but will however continue to field a team while Suzuki are bolstering their efforts with a bigger presence of riders using their SV650 and Honda are now back on the scene with McGuiness and their CBR500R.

John McGuinness said: “It was strange sitting on the sidelines last year while the race was on, particularly as the Senior was cancelled as well. It’s an interesting class and will present different challenges to the other races but I’m looking forward to having a crack. The team undoubtedly has a lot to do in a short space of time to be ready but I’ve got every faith in them.”

We can’t forget the locals, and Manxman Dan Kneen has announced his 2013 plans. Check out his preparations in this awesome video by Andy Stewart Productions