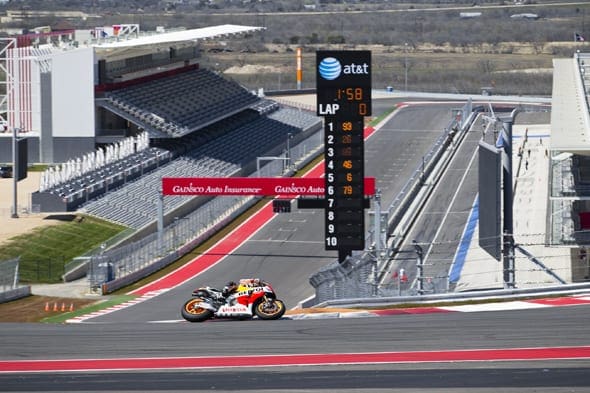 After F1 and the Ecclestone roadshow visited the Circuit of the Americas last year, the entire motorcycling world were giddy with excitement over MotoGP coming to Texas in 2013. Yeehaa, etc.

The venue and facilities are nothing short of stunning, and the circuit itself ain’t too shabby, is it? That first section, which mimics Becketts at Silverstone, is sure to provoke some cloth-touching among riders, and the radical change of elevation is welcoming for a new track on the calendar.

Being a new circuit, Repsol Honda decided to take Dani Pedrosa and Marc Marquez for a bit of sneaky practice, and sort trivialities such as gearing. Yamaha got wind and gatecrashed the shindig.

It’s no surprise that MM93 is fast but with one day left of testing at Austin, he remains fastest. Faster than his teammate, faster than reigning world champ, J-Lo, and faster than his hero, Valentino Rossi. At one lengthy point yesterday, Marquez was nearly a second quicker than the next guy. I’m feeling a shifty bet coming on.

With only a handful of bikes on track and little rubber being laid, times aren’t an accurate indicator. Yamaha have packed up and head to Jerez for next week’s official test, after claiming their homework is done. They’ve sorted the gearbox (which will be fed to Cal, Brad and the Tech3 team) and have a rough idea of what the Bridgestones will do. Job done, although Rossi was over a second off MM93’s pace…

Brutally speaking, Marquez is looking Stefan Bradl look silly. Forget the paint scheme: Bradl has a factory bike and a Honda contract, and gone are the years of massive divide between works bikes and satellite teams. There were also some US-based CRT teams at COTA…

And Rootsy, the fecker, is off to COTA as we speak for the launch of the Panigale 1199R. Check back early next week for Ducati loveliness.